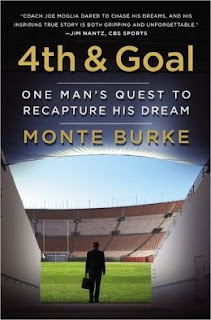 4th and Goal on Amazon

This is probably the only time I will ever be grateful for the dearth of quality football books offered by my local Brooklyn library branch. Its limited gridiron selections forced me to choose between Monte Burke's lamely-titled and generically-covered 4th and Goal and Michael Strahan's Inside the Helmet. Given that the latter was penned on the heels of a very nasty and financially-destructive divorce settlement, I decided to take a chance on a book that, if its cover was any indication, seemed to be a cliched inspirational chronicle of some kind of football executive. I feared it might even have an appendix about applying the general philosophy espoused by this mysterious executive to the boardroom to help businessmen move cheese and tip points and all of that other stuff. Thankfully the book is actually a fast-paced and engrossing account of a pretty incredible story and is mercifully free from any silly appendixes.

4th and Goal focuses on Joe Moglia, the 2011 coach of the UFL's Omaha Nighthawks and the circuitous path he took to wind up with such a position. Burke opens in 1983 with Moglia serving as Dartmouth's defensive coordinator. Recently separated from his wife and kids, Moglia is living in an unheated storage room within the team's field house. While he will be offered an assistant position with the Miami Hurricanes at the end of the season with the understanding that he would eventually become their defensive coordinator, Moglia resolves himself to leave coaching and pursue a job on Wall Street to better provide for his family. He somehow becomes a ridiculously successful executive at Merrill Lynch and then TD Ameritrade. Moglia was intensely passionate about his coaching pursuits and he forced himself to avoid attending any football games for the sake of his own emotional stability. At age 60, almost thirty years after his career epiphany, Moglia leaves his post as CEO of TD Ameritrade to rekindle his dreams of becoming a college head coach. Several years later he finds himself heading a UFL team and competing against the likes of Marty Schottenheimer, Jim Fassel, and Dennis Green. 4th and Goal chronicles Moglia's hardscrabble youth in New York City and early coaching history, his unlikely Wall Street ascendancy and whirlwind return to coaching, and the Nighthawks' 2011 season.

Moglia's ultimate goal upon leaving TD Ameritrade was to land a college head coaching job. After some understandable trepidation from athletic directors, he took a job as an unpaid coach for the Nebraska, where he was hamstrung by NCAA regulations. Essentially barred from performing any on-field instruction, he still spent long hours with the coaching staff studying film and soaking up everything he could from head coach Bo Pellini and the rest of his staff. After two years with the Cornhuskers where he remained unable to attract any college head coaching offers, he got the Nighthawks head job. Initially recruited for his managerial expertise as someone who could save the cash-strapped team and league (from financial ruin, Moglia eventually demonstrated that he would make a capable coach for the team. Moglia treats his stint with the Nighthawks as one of his final opportunities to prove that he is worthy of a college head coaching job. While I still hate the book's title, it is a rather fitting description of Moglia's circumstances.

Moglia has a great story and his personal narrative could certainly carry a book on its own. The sense of stubborn determination that he brings to coaching and business is just mind-boggling. For someone to parlay sixteen years of coaching football and an economics degree into a job with Merrill Lynch is just mind-boggling. Its not like he started out in the company's mail room or anything either, he persistently dogged anyone tangentially connected with the firm and landed a job as a trader. He additionally impressed his superiors enough to land in a fast-track leadership program for MBAs (Moglia was the only person in the twenty-four person class missing such a degree). I found myself legitimately rooting for Moglia to succeed in his coaching quest and I had to vigilantly avoid googling his name while reading to "spoil" the book by seeing where he ended up. That being blogged, 4th and Long is full of colorful characters beyond Moglia. UFL rosters were populated with a variety of former college stars and NFL castoffs who will be familiar to anyone who followed football in the early 2000s. The Nighthawks' speed option offense was led by the two-headed attack of former Heisman winner Eric Crouch and troubled Oregon quarterback Jeremiah Masoli. While 2010 Nighthawks Jeff Garcia and Ahman Green did not make the cut in 2011, Moglia did bring in Maurice Clarett (who actually made the team) and Burke recounts Clarett's troubled life after leaving Ohio State. As someone who intensely followed the NFL ten years ago it was cool to see where players like Dominic Rhodes, Angelo Crowell, and Stuart Schweigert ended up (spoiler alert: the UFL).

Burke is a staff writer at Forbes (the book actually grew out of a 2010 feature he wrote on Moglia for the magazine) and the book reads like an extended magazine article. Thankfully there is enough substance in Moglia's story to engage the reader for most of its 271 pages. Many football books that cover one particular season can degrade into a rote game-by-game format that read like a collection of newspaper recounts. Burke is able to avoid this through moving back and forth between on and off-field action. The only I really hit a snag while reading was when Burke delved deeply into Moglia's tenure at Merrill Lynch and TD Ameritrade, but I suppose that is to be expected from a Forbes employee. And as someone who doesn't generally read about finance, Michael Lewis is the only point of comparison I can use on the genre, and I don't think that sets a pretty high bar. On the football side, Burke never goes all Mike Mayock-technical on the reader (which is fine because its not really appropriate for telling this story) but he does offer up cogent explanations of concepts like Nighthawks coordinator Tom Olivadotti's pattern read defense and Burke thankfully never dumbs down his prose to cater to the less football-savvy, which is appreciated given the main audience of the title. The writing can be overdramatic and cheesy at times but as far as football books are concerned Burke shows a mercifully high level of metaphorical restraint and his prose does not detract from the compelling story.

I realize its difficult to really gauge how I feel about this book without having other reviews on the blog to serve as a baseline. I might be one of those people who gives everything an 8 or above because I refuse to feel like I "wasted" my time reading a bad book. As someone who (quite painfully) finished Romo, however, I can assure you that I'm fine with admitting when I have incurred some sunk literature-y costs. I didn't in the case of this book.

4th and Goal features a unique story about a captivating figure and its written in a breezy and entertaining fashion that is ideal for a football fan with a long subway commute. Its probably the second best football book I read this year, narrowly losing out to Warren St. John's Rammer Jammer Yellow Hammer.

I was already aware that the Canadian Football League is full of strange happenings, but I did not know that its regular seasons lasts 19 weeks and teams play 18 games.

Bart Andrus, the Nighthawks' offensive coordinator, was once the quarterbacks coach for the Tennessee Titans and tried to convince Jeff Fisher to employ the read option with Steve McNair. Fisher briefly considered it and ran some read option plays for McNair in training camp but ultimately tabled the idea much to the delayed dismay of the late-1990s football watching public.

Drafts for the UFL were held remotely 2 days after the NFL draft with picks being announced on Twitter. Owners and coaches were actually faced with walking the difficult line between picking talented players and those who would not have enough skills to latch on with an NFL franchise.

NFL Europe was used as a testing ground for several proposed innovations such as overtime rules and one-way radio communication for coaches and players. I was not aware the the NFL's European cousin also awarded 4 points for field goals over 50 yards, something that has not yet been imported across the Atlantic.

Maurice Clarett (who according to Sports Illustrated is now playing rugby and is hoping to gain a spot on the 2016 Olympic team) wore the number 13 in memory of the time he jumped out of a second-story window while robbing a house at age fourteen, which left a gash on his head that required 13 stitches.

The card game bourre was incredibly popular and conflict-inducing among Nighthawks players and both qualities apparently extends across the professional sporting universe. Gilbert Arenas' gun-in-the-locker-room stunt in 2009 was triggered by what I imagine was a very contentious game of bourre with Jarvis Crittendon. Wikipedia tells me that in 2011 bourre was behind a fracas between Memphis Grizzlies players O.J. Mayo and Tony Allen on the team plane.
Posted by Matt Lieberman at 05:12