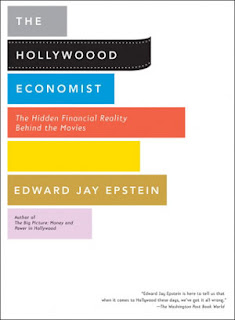 The Hollywood Economist 2.0 on Amazon

A few years ago I read an article in the Wall Street Journal explaining that many American blockbusters were set in Manhattan because the location was a familiar one to foreign audiences, who were becoming increasingly important in studios' revenues.  I thought it was a fascinating piece on a rather under-reported aspect of the entertainment industry: the dynamics of the business itself. Edward Jay Epstein's The Hollywood Economist 2.0 attempts to fill this knowledge void and describes the current state of the film industry and the economics driving it. Epstein has written about the film business for The Wall Street Journal (though I don't think he penned the aforementioned article about movie settings) and The New Yorker and his articles seem aimed to the curious moviegoing layman with a cursory understanding of business. The Hollywood Economist 2.0, which builds off of several of his pieces, is a quick and oftentimes entertaining read about the basic concepts of how the industry generally operates and (sometimes) makes its money.

The book is organized around several main areas, including film financing, the studio-theater dynamic, and talent contracts. Many segments of the book appear to be fleshed-out versions of previously-written pieces from the author, but I felt everything was well-organized and nothing felt very disjointed. While Epstein spends a good bit of time on some unsurprising and basic elements of the film business, like the generous subsidies offered by particular localities to attract film shoots and how risk-averse studios like to stick with franchises and sequels, there is plenty of material that will appeal to readers with a large amount of background knowledge as well. Some more startling revelations include how onerous ADA regulations which kicked in once a theater hit 300 seats led to the development of multiscreen cinemas and how studios would raise revenue through extracting and selling the silver from old film prints. I thought Epstein's breakdown of actor contracts, such as the plum deals secured by Tom Cruise for Mission Impossible and Arnold Schwarzenegger for Terminator 3 were especially interesting and covered rather uncharted territory. I do wish Epstein mentioned whether such arrangements were par for the course for megastars like Cruise and Schwarzenegger or rarer anomalies. As a result of its article-y foundation, the book proceeds at a fast clip but I feel that Epstein elaborates enough on every main concept to do it justice. Even when he delves into topics such as film financing and contract legalese, Epstein maintains a nice balance between being informative and entertaining.

Epstein also offers some insightful analysis about the industry and its current trends. He notes that studios' reliance on foreign audiences has shut down many potential villains for screenwriters, as using former stock evildoers such as sinister Chinese and Russians is now commercial suicide. The book also provides a brief overview of premium cable channels and how their shift towards exclusive series such as The Sopranos and The Wire freed them from being as beholden to studios for content. While the "expanding upon previously-written articles" makes some sections seem slightly antiquated (such as the first chapter that discusses the rather horrid 1998 Godzilla remake and other similarly-atrocious late 90's fare) the book was published in 2012 and Epstein's chapter on Netflix and the future of the business is enlightening and does not feel dated.

The Hollywood Economist 2.0 is designed for a mass audience and Epstein doesn't employ any obscure economic or accounting jargon within its pages. As long as you have a cursory background understanding of business you will get a lot out of this book. I have found that most film industry books are "how-to" works geared towards aspiring directors or actors and I am thankful that Epstein aimed his book towards the general film-interested reader. Some sections drag a little bit and sometimes he touches upon some of the industry's more commonly-known elements, but the book is ultimately a quick, entertaining, and informative read.


In Sum
A very readable account of how films are financed, talent is compensated, and basically how money is earned by the film business. The Hollywood Economist 2.0 is worth a read if you have any curiosity about the innerworkings of this topic that is surprisingly underserved by the literary industry.

Note: The Kindle edition of this book is currently $2.79 on Amazon as part of its Big Deal sale which ends on August 4th. Now if you look at my view counter you will see that this blog is not a shill for Amazon (and if it were it would be a pretty terrible one at that) and I am only pointing out this fact because I think its a pretty good deal.
Posted by Matt Lieberman at 17:05