Book Review: Inside the Helmet by Michael Strahan and Jay Glazer 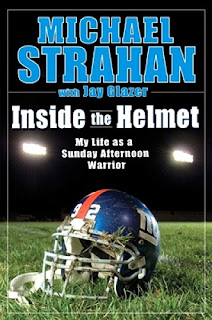 Inside the Helmet on Amazon

What came first - the NFL memoirs or the misery? Do I read such fare because I feel miserable while mired in the peak of football's offseason? Or is my football-deprived misery just compounded by the invariably insipid nature of most/all of the genre? (dearest apologies, Mr. Hornby). I grapple with these questions every time I pick up a book like Michael Strahan and Jay Glazer's Inside the Helmet, which always happens when I have exhausted the library's supplies of all other football books. For some reason I have always had a soft spot for such works, though I usually finish them lamenting about how many Economist articles I could have read with the time I spent reading reflections on a player's high school days and some "hilarious" anecdotes that I guess must not really translate to print. Strahan's book actually reads much less like an autobiography and more of a broad but sometimes insightful overview of what playing in the NFL entails. This is by no means uncharted literary territory, as NFL rules stipulate that the Super Bowl must be played every year and publishing rules mandate that the stars and coaches associated with the winner of said event must flood the book market with their co-written and bland accounts of their "magical and inspiring season whose lessons can easily be adapted to the meeting room and child rearing etc. etc." Like most other books penned by players, Inside the Helmet isn't particularly well-written and at times it reads like a litany of complaints from a curmudgeonly veteran. But Strahan is also able to cull from over ten seasons of anecdotes and personalities like Lawrence Taylor and Tom Coughlin, and there are times where his book even borders on the insightful. I would almost deem it a worthwhile read, even though it required being held it at a ninety-degree angle when read it on the subway.

The book is structured rather strangely compared to the typical player book. Most follow the frame story setup employed in most mob pictures. The first chapter is inevitably set before, during, or after the Super Bowl (which his team wins, of course). The next chapter begins with something like "as far back as I can remember, I always wanted to be a football player" (dearest apologies, Mr. Scorcese) and describes from childhood the steps they took towards becoming a Super Bowl winner. Strahan is unable to utilize such an approach, however. The book was written at the end of the 2006 season, where Strahan only played 9 games due to a lisfranc injury and the team went 8-8 and missed the playoffs. At this point you may be asking why Strahan couldn't have waited one more year to write his book where he could end it on an upbeat note when the Giants defeated the then-undefeated Patriots in Super Bowl XLII? Perhaps Strahan was aware the Giants would win the Super Bowl the next year but he wanted to get a jump on Tom Coughlin, David Tyree, and Plaxico Burress(!) and corner the "books by Giants employees" market for the time being. Given the quality of Strahan's prognosticating abilities on Fox NFL Sunday, though, I am guessing he was not aware that his team would win the big game the following year. A more realistic reason for the book's publishing date was the defensive end's ludicrously messy and exhorbinantly expensive divorce that wrapped up in 2007. Strahan was ultimately left on the hook for quite a bit of money and likely thought that writing a book would help him in the process. So while it loosely (to the point where its not even chronologically consistent) follows Strahan's 2006 season he is ultimately drawing from a far broader base.

Since Strahan is unable to follow the generic template afforded to Super Bowl champion authors, the book is focused more with giving a behind-the-scenes look at playing in the NFL and does not limit itself to in-depth coverage of one season. Again, this "inside look" is something that has been done many, many times before. All player memoirs inevitably touch upon the subject. And there are certainly sections in Inside the Helmet that add little to what fans already know. The kind of person who is going to read a book by Michael Strahan on their own volition (and I did not see any copies of Inside the Helmet in the "Assigned Summer Reading" section of my local library) is probably already aware that meetings are long and boring, "most" players are clean and do not take steroids (and of course the author abstains), and that players get excited on game day. Ho-hum. They also probably generally know the basics of the NFL workweek and what days are spent on film, walkthroughs, and practice. These things stay pretty consistent across teams.

Even with such faults, there are some truly interesting sections of the book. I especially enjoyed the chapter on defensive line technique and the various strategies Strahan employs to beat his blocker. The intricacies of line play isn't comprehensively covered by the media as it doesn't translate well to statistics and most people (myself excluded) don't find it all that interesting. While Strahan's general musings aren't groundbreaking (practices are long, practical jokes are common, there is a wide spectrum of intelligence among athletes) he is able to cull the best anecdotes from thirteen seasons of play. He also had the "pleasure" of playing with and for the likes of Lawrence Taylor, Tom Coughlin, and Jeremy Shockey who provide ample sources of engaging story material. Strahan also makes some sharp observations about the changing dynamics between players and coaches. Players are gaining much more power in the relationship, as their salaries have skyrocketed and many stars are aware that teams cannot afford the cap hits associated with dropping them. Additionally, general managers and owners are operating under increasingly-shortened time horizons and coaches, especially new ones feature incredibly short leashes. Strahan posits that players are aware of this and recognize that coaches do not wield as much power as they used to in certain areas. Its something that makes sense to me upon reading it but I never really thought about before. Strahan also mentions how coaches are often reliant on player recommendations to get new jobs and that he has consulted with coaches and front office staff considering hiring his former coaches.

I found it remarkable that Strahan really never goes into much detail at all about his personal background. Normally I wouldn't be too troubled by that omission, but this is a player who grew up in Germany, played one season of high school football, and still managed to be dominant enough at tiny Texas Southern University to be drafted in the second round by the Giants in 1993. That unorthodox path to the NFL seems like it is worth devoting a few pages to. The reader is treated to some chapters on Strahan's personal life, though unfortunately they are limited to him airing grievances related to his fame and what a terrible money-hungry person his ex-wife is. These sections drag quite a bit. Strahan also decides to curiously end with Super Bowl XXXV, where his team was summarily thumped by Jermaine Lewis and the Ravens (six years before the book was published no less). I understand that the Super Bowl is a big deal and that readers may be interested in his recollections, but his analysis is limited to noting how much media attention there was, what a great opportunity he had to play for the league title, and two moments from the actual game itself (which is all he claims he can remember). It appears he rectified this in the paperback edition released shortly after the Giants' XLII victory with two chapters on the 2007 season. I can't speak on these extra chapters because my library was just too eager to get this book on its shelves to even think of waiting for the paperback.

Before my lukewarm praise gets you running out the door to procure your own copy just be aware that this isn't going to knock Paper Lion or America's Game off the best football books pantheon or anything. Strahan has an unfortunately tendency to pepper his writing with words in all caps to emphasize his points which to me displays a VERY poor grasp of adjectives and he uses some truly dreadful metaphors while describing his gridiron exploits. But honestly, such flaws, while annoying, should be expected when one approaches a book like this. And its not like adding Jay Glazer as a co-author is going to help such matters. Still, Inside the Helmet was a fast read and provided some offseason enjoyment. I reckon I could have polished off most of a Technology Quarterly-less Economist in the time it took me to finish the book but I still thought it was decent overall.


In Sum
Inside the Helmet is a somewhat enjoyable read despite its obvious flaws. There are some legitimately interesting passages and it moves at a very fast pace, which comes in handy when Strahan is complaining about things. It is worth reading if you are really desperate for football reading material (and if you live in the New York metro area I'm guessing your library has several copies) and Giants fans will probably especially like it.


Observations/Interesting Things Learned
According to Strahan (a very important qualifier), rookie hazing was far worse back in the day. Things apparently calmed down after then Saints rookie Cam Cleeland was injured after being hit with coin-filled socks swung by veterans in 1999.

Strahan claims (see previous parenthetical statement), rookies are considered rookies until they have finished the third game in their second season. He offers no further explanation, perhaps assuming (egregiously incorrectly) that this fact is blatantly obvious to the reader.

Offensive tackle Lomas Brown apparently passed a kidney stone during one of his games. That is probably a condition that requires personal experience (which  have thankfully avoided so far) to truly understand the pain associated with such a feat(?) but I imagine it wasn't the most pleasant day of Mr. Brown's life.

I thought Strahan was remarkably candid in expressing his ire and outward frustration towards Jay Feeley after the kicker missed three field goals at the end of a game against the Seahawks in 2005. It was actually refreshing to read, though it didn't help my faith in the inherent goodness of humanity.

The NFL Players Association used to put salary sheets on players' stools in locker rooms that showed what every other player in the league made for their position. It brought up quite a bit of ill-will amongst Giants players and it probably didn't do Jamarcus Russell or the old rookie contract structure any favors in the eyes of professional quarterbacks.

Strahan posits that defensive linemen have to remember a staggering amount of information that is incomprehensible to the common man. That may indeed be the case. But when the strongest support for his argument is that Jay Glazer had difficulty remembering defensive line assignments that Strahan showed to him I felt a little skeptical. Plus I have to question the general intelligence associated with someone whose methodology uses Jay Glazer as the baseline for average human intelligence.
Posted by Matt Lieberman at 12:50