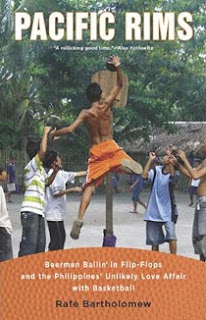 Having read and enjoyed Jim Yardley's Brave Dragons, which covered Chinese professional basketball, earlier this year I was eager to further explore the genre of "books about Asian basketball written in English," assuming such a thing was possible. Thankfully after some cursory research I learned about Rafe Bartholomew's Pacific Rims, which focuses on the Philippines' notable and somewhat-curious obsession with hoops. I finally got around to reading the book and believe that it is one of the best basketball books I have ever read. Bartholomew, currently a senior editor at Grantland, provides an incredibly entertaining look at the country's fascination with the sport with a book that is equal parts fly-on-the-wall season chronicle, deep examination of Filipino culture (athletic and otherwise), and travelogue, all of it worthwhile.

Unless Bartholomew is lying to the reader, Filipinos are remarkably into basketball and the sport has found its way into virtually every aspect of life in the country. Soccer never really caught on, and basketball is unquestionably the nation's most popular sport. Courts can be found even in the most remote areas and are viewed as centers of social life, the country's ubiquitous jeepneys are often adorned with a random assortment of NBA team logos or just Jerry West's silhouette, and players in the very popular Philippines' Basketball Association (and some Americans like Clyde Drexler, who is revered by Filipinos for some reason) are cultural icons that hawk a plethora of products to consumers.

The fact that basketball is so huge in the Philippines is enough to make for an interesting book. If Bartholomew just traveled across the country and noted the country's prevalence of courts and games, how random NBA games from the nineties serve as midday filler on television networks, and the strong following for the PBA (the second-oldest professional basketball league in the world) he could have made for a decent read. Bartholomew goes far deeper in Pacific Rims, however, much to the reader's benefit.

A good bit of the book covers the 2007 "conference" (season) of the Alaska Aces, a PBA franchise led by American coach Tim Cone. This gives Bartholomew an excellent opportunity to describe the nature of idiosyncrasies of the country's major professional league. As was the case in China, Filipino professional basketball leagues do things a little bit differently than the NBA. Teams are limited to one "import" on their roster, though some cutthroat coaches will often bring in multiple foreigners to compete for a roster spot or hire a new import in midseason. Imports must also meet a height restriction, which appears to change from year to year and is far from impervious from abuse or corruption. Franchises are all run by business owners, leading to some unfortunate names such as the Burger King Whoppers and Rain or Shine Elasto Painters (the Alaska Aces are naturally named the Alaska milk company). There are musings about referee corruption and some fans are imbued with elements of soccer hooliganism. Bartholomew's sections on the league's history and his analysis of its present iteration are truly captivating reflections on how the professional game has been appropriated across the world. The author manages to develop a close connection with many Aces, especially their import Rosell Ellis, and he is able to provide a very intimate account of what turns out to be a rather exciting campaign for the team. Bartholomew possesses a very deep understanding of the game (he is a decent player who was recruited to play as a ringer in an amateur tournament in the resort island of Boracay) and his game descriptions are vivid, suspenseful, and entertaining.

In addition to following the Aces, Bartholomew devotes many pages to describing general life in the Philippines. He spent three years in the country on a Fulbright grant and was able to explore much of the country and its culture over the period. His hoops focus is not limited to the professional ranks, and Bartholomew plays many pickup games with various cross-sections of Filipino society and travels across the country (the PBA is based entirely in the Manila metropolitan area) to see that the national obsession extends far beyond the PBA's borders. These sections read more like travel writing, as he describes driving and biking across precarious terrain in pursuit of some court in the remote mountains, game where midgets face off against drag queens, or similarly-intriguing basketball attraction, and they are just as strong as the more conventional Aces chapters. Bartholomew also occasionally detours into discussing racial and cultural aspects of Filipino society, such as his guest appearance on a rather racist Filipino telenovela and the complicated relationship between the Filipino-Americans in the PBA and their countrymen. I felt that these off-court sections enriched the book more than anything else and provided a fuller account of Filipino culture.


In Sum
I highly recommend Pacific Rims to anyone interested in basketball or just learning about a foreign sports culture in general. You certainly don't need to be able to recognize former PBA imports like Cedric Ceballos or Darvin Ham to appreciate the book. Bartholomew can repeat himself at times and sometimes injects too much of himself into the book, but he ultimately has crafted one of the best basketball books I have read. The book's scope extends off the court to the sport's cultural and social impact and he is equally strong in covering both. Pacific Rims is  ultimately a very well-executed book on a fascinating subject that is a pleasure to read.