Book Review: Where You're At by Patrick Neate 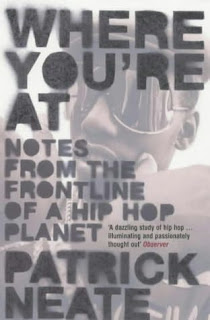 Where You're At on Amazon

As Patrick Neate is seemingly eager to point out, hip-hop comprises more than just a musical genre. He outlines early on in his book Where You're At the nebulous four/five elements of hip-hop culture: emceeing, DJing, graffiti, break dancing, and sometimes consciousness. Where You're At concerns itself mainly with the social aspects of the culture as Neate travels across the world to provide a snapshot of how the genre has been appropriated and adapted in different countries. Spanning five cities in four countries across the world, the author focuses on their racial and sociological environments and links them to greater hip-hop culture. Unfortunately, the book reads like an overly academic reflection on urban racial identity and politics and is hindered by Neate's naive obsession with wresting hip-hop from corporations and materialistic rappers and return it to the alienated urban masses who started it.

The book follows a pretty set formula. Neate will travel to some city (he goes to New York, Tokyo, Johannesberg, Cape Town, and Rio) starts each section by providing some background about the history of hip-hop in the region and how it has evolved. The portions where he explains the lyrical and musical nature of the global variations are some of the most interesting parts of the book, such as how Brazillians seem to be far more amenable to overtly political music and the derivative nature of a lot of Japanese hip-hop. He will then proceed to interview several underground artists or activists associated with hip-hop who generally emphasize positivity and eschew the mainstream. Then he goes to a club or two and describes his surroundings. This methodology clearly prevents the book from being very comprehensive in scope, though Neate did seem to do his homework on the history of each city's respective hip-hop scene and I wish he went more in-depth on describing the sounds of global hip-hop. I haven't listened to a ton of hip-hop from outside the US, but in general I have noticed that it is almost impossible to find an artist from outside North America that "sounds" American, and not just due to an accent or language barrier. Furthermore, hip-hop is a largely verbal genre and thus no one in North America is regularly exposed to (non-Psy) hip-hop from other continents. As a result, Neate is really covering unknown territory (to me anyway) when he discusses aspects of each city's hip-hop music. But the author spends most of his time outlining the social and racial aspects of the genre in each city while making sure to take time to cast a disdainful eye towards the shallow nature of the country's more mainstream artists. While Neate states that his intends his book to be a snapshot of what hip-hop was like in parts of cities, I think it may have been better if he tried to give a more comprehensive overview and focused more on the macro than the micro within each city. Some of the individual interviews didn't feel like they really added much to the book. While the book is ten years at this point, if anything I found this to be a plus as it presented a reminder of the state of the genre in 2003 (apparently Fabolous was bigger than I remembered).

Though knowledgeable, Neate can be a rather irritating tour guide throughout the book. I understand why he includes his personal experiences with hip-hop in the introduction, but I felt that he injected too much of himself into the book in other sections, such as when his girlfriend gets groped at Japanese club. Perhaps it his insecurities regarding his UK citizenship or his race, but something compels Neate to constantly drop random unnecessary hip-hop facts to establish his hip-hop bonafides. He assiduously footnotes every musical reference he makes and his prose is ridden with irrelevant parenthetical musings (how dare he!1) And its not like the fun trivia tidbits I include at the end of my reviews. It is far more didactic fare like when he notes how to delineate an "emcee" from a "rapper." I get a similar feeling of "this author really feels like he needs to establish his credibility and knowledge of the genre" with a lot of Pitchfork's rap reviews. It's not too pleasant. He also can be prone to some rather absurd theories, such as how Shrek is actually an allegory for eminent domain where a "negroid" ogre is forced to leave his lovely but ramshackle swamp dwelling by an uptight white guy and how Enron's collapse was a result of the company's failing to "keep it real."


In Sum
Though it has an interesting concept, Where You're At ultimately fell flat for me due to its overly academic nature and what I saw as an overemphasis of social and racial components of hip-hop rather than musical ones. If you are really into sociology and racial identity especially in countries such as Brazil and South Africa then you might like this book more. I suppose a good bit of my disappointment with the book resulted from the fact that it's subject matter didn't really conform to my expectations.


Despite what the author may claim, the RZA did not coin the phrase "Rap and bullshit" to refer to rhythm and blues. De La Soul used the phrase way back in 1991 back when RZA was still rapping under Prince Rakeem. I realize mentioning this fact can be seen as pointless and just taking another potshot at an author who I have already made clear that I don't like all that much. Fair enough. But Afro Connections at a Hi 5 is just too good a song to go uncredited.

I was worried that Neate would spend the bulk of his time in New York interviewing obscure rappers and "hip-hop activists" who while providing legitimately helpful services to the community would not be able to provide much insight into any of my favorite hip-hop albums. And he certainly meets a lot with the former in all five cities. But New York was the one city that actually featured artists I have heard of and I kept my fingers crossed that some of them might show up on his pages. Neate actually gets to pay a visit to the Definitive Jux record label in lower Manhattan, responsible for releasing some of the best underground hip-hop of the 21st century from acts like El-P, Cannibal Ox, and Aesop Rock. Aesop and El are even in the building when the author comes by. Unfortunately, El-P seems to do nothing but sleep on a couch and Aes is similarly laconic. While EL-P is a pretty stocky guy who probably doesn't take especially well to having his sleeping habits disrupted this was still the most disappointing part of a book that I didn't really enjoy all that much.

Big L's posthumous album The Big Picture actually went gold, something I was not aware of. This achievement was considerably tainted in my eyes when the book goes on to explain that Rawkus records bought the album back from stores in order to inflate its sales numbers.

According to Neate, France is the second largest market for hip-hop music, or at least it was at the time the book was written in 2003. The country also has a music bureau whose sole purpose seems to be creating an overseas market for French musical product. I couldn't imagine it being that difficult to sell foreign folks on Air or Daft Punk but I hope for the sake of all hypothetical Bureau Export employees that they consider Celine Dion outside of the organization's jurisdiction.

I was always afraid that even with all the weird I books I read I would go through live having never seen the phrase "white Mozambican ska band" in print. Thanks to page 118 of this book I can scratch that one off the bucket list.

Maybe this is old hat for those who had already graduated pre-school before the end of South African apartheid but I found the pencil test to be one of the more absurd government policies I ever read about. Used to determine race in the country, (South Africans can be seen as either white, black, or colored, a concept that Neate spends a lot of time with in the book) the test consisted of sticking a pencil in the hair of child with questionable race. If the pencil stayed in their hair they were considered "colored" while if it fell the ground they were considered "white." Ridiculous.