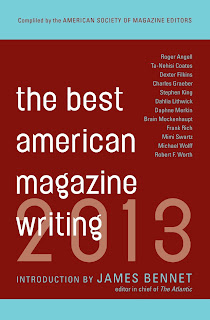 I have always enjoyed longform journalism but often neglect to read random intriguing magazine articles because their completion doesn't come with the same sense of satisfaction entailed by finishing a book. I realize this is a ludicrous and nonsensical reason to curtail one's magazine reading but it is honestly an issue for me. Thankfully every year the fine people at the American Society of Magazine Editors are kind enough to cull together the best pieces in a volume that one can proudly add to their Goodreads shelves. Many works included in the collection have been languishing in my Gmail inbox and RSS feeds for several months and its nice and rewarding to finally knock them off. After finishing The Best American American Magazine Writing 2013 I can state with confidence that I missed out on some great reads in 2012. The collection is overall a dense and wide-ranging read that is enjoyable despite being somewhat uneven.

The book features finalists and winners from the usual suspects of the highbrow magazine article family: features, essays, reporting, public interest, and one short story by Steven King which feels kinda out of place but isn't a terrible read. Some categories like profiles are scattered throughout while others such as the more political pieces are grouped together and the organization seems logical and makes for a balanced reading experience. Most of these reads are rather demanding and cerebral, the one Esquire profile that made the cut covers Robert Caro, the historical writer who has been churning out humongous biographies of Lyndon B. Johnson every few years (and is responsible for the Robert Moses biography The Power Broker, my favorite book of all-time). There are no sports or humor articles and there is nothing remotely fluffy about most of the selections. The book encompasses some heavy topics like wrongful convictions, pulling the plug on a elderly relative, wars and unrest in Libya, Iraq, and Afghanistan, and abortion. While most of these pieces are well done and fascinating the collection can be overwhelming if you attempt to plow through everything in a few days like I approach most books. Most magazines place their feature articles between shorter and lighter fare and Best American Magazine Writing is probably better experienced as something read in many sittings rather than an individual magazine that can often be polished off in an afternoon.

Some of the articles are truly incredible and reminded me that I should do a much better job of maintaining my Longreads and Longform RSS feeds. The aforementioned Caro article profiles a devoted and passionate professional who has been tirelessly honing his craft for several decades in a Jiro-like pursuit of perfection. Chris Jones' feature follows the writer as he makes several attempts at perfecting the fifth paragraph of the 452nd page of his 2012 book Passage to Power and offers insights into the "incredibly productive, wonderful mania" that fuels the humongous biographies. One especially enlightening anecdote tells of how Caro was able to track down a former classmate of LBJ's armed only with the knowledge that the man lived in a Florida town with "Beach" in its name. Caro and his equally-determined wife Ina were eventually able to locate the elusive classmate through scouring phone books and arrived unannounced at his trailer shortly thereafter where he participated in an in-depth interview. Another highlight is Chris Heath's story on the truly outrageous Zanesville zoo escape. Heath had some rather excellent material to work with, but he goes even further by segueing from his reporting to psychologically examining the owner responsible for the devastation and the state of the exotic pet industry. Other standouts include Pamela Colloff's gripping account of the Michael Morton case and the history of DNA testing and Sabrina Rudin's Rolling Stone article on how anit-gay school policies in a Minnesota school district contributed to a wave of suicides. These pieces are all fascinating and written well-enough to be rewarding even to those readers who have never/lack the physical strength required to pick up a Caro book and have no interest in exotic zoology and enough to justify the price of admission.

Unfortunately, there were a few articles that didn't really catch my interest. If I encountered such articles in their natural habitat I would merely skip it and continue to the rest of the magazine but I felt compelled to finish everything in the book (probably due to the fact that I knew I was going be reviewing the book, with my reader(s) expecting me to have actually completed reading it). It is rather disheartening to lose interest early in an article with full knowledge that there are many pages/KB to go until it ends. But I found most of the selections to be engaging and worth the considerable time investment. And you certainly get your money's worth, as the volume includes twenty finalists and winners chosen by the editors.

Best American Magazine Writing 2013 is on the whole a worthwhile read if you enjoy longform journalism (and haven't encountered these articles before. It is worth mentioning that my favorite articles from the book were ones that I had heard of and intended to read earlier. I did not generally enjoy the less-familiar articles as much). It is a somewhat uneven but generally excellent read with many well-written pieces encompassing a variety of topics.

Full Disclosure: The nice people at Columbia University press sent me an advanced e-book copy of the book. It will be released on December 10th.
Posted by Matt Lieberman at 09:12