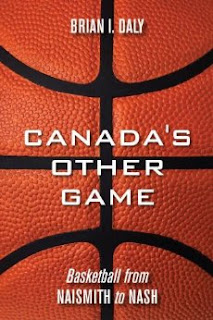 Like most Americans, my knowledge of Canadian basketball essentially begins with the Ontario-born James Naismith and ends with Steve Nash. While comprehensive in terms of chronology, the timeline between those figures is murky at best, basically consisting of Rick Fox and when the Grizzlies used to play in Vancouver. Brian Daly does a commendable job at filling these mental gaps in his enlightening and entertaining book Canada's Other Game. Daly is a Canadian sportswriter who has appeared in The Toronto Sun and the Canadian Press and maintains QHoops.net (devoted to Quebecois basketball). In Canada's Other Game he outlines the country's involvement and contributions to the sport from Naismith to the present and highlights the game's deep history with the country and its most important teams and players across all levels and genders. Canada's Other Game is worth a read for any basketball fan or Canadian curious about the country's connection to the sport.

Canada's Other Game begins with the start of the sport itself, as Dr. James Naismith was born in Ontario and raised in the country. Daly chronicles Naismith's life and his efforts to create the sport to appease some of his unruly students at a Massachusetts YMCA. Like the rest of this book, the passage features a good amount of depth and is well-researched, including insights such as how basketball was heavily influenced by Duck on a Rock, a game that featured prominently in Naismith's childhood. Four of Naismith's eighteen original malcontents were from north of the border and they helped spread the sport upon returning to their homeland. Daly proceeds to describe the early history of basketball in Canada and dynasties such as the 1920's women's basketball powerhouse Edmonton Grads as well as the early history of the NBA. The NBA actually grew out of the desire from major arena owners to fill spaces between hockey games held by the recently-created National Hockey League. The ill-fated Toronto Huskies' 1946 contest against the New York Knickerbockers was technically the league's first ever game.

Daly covers all aspects of Canadian basketball, and he also focuses on the country's performance in international competition under the leadership of coaches such as the legendary (in Canadian basketball circles) Jack Donohue. While some of the sections on amateur basketball in the early decades didn't hold my interest all that much, I really enjoyed reading about the various financial hardships perpetually imposed on the national team by stingy sports bureaucrats, an issue which kept Steve Nash from playing for the team for several years in the early 2000s. Daly shares one especially fascinating anecdote about how national coach Donohue had to share a hotel room with referee Ron Foxcroft during a 1973 tournament in Italy. After the two roommates butted heads during a questionably-called game overseen by Foxcroft, Donahue was locked out of his hotel room by the referee and had to sleep in the hall.

The book really starts to shine once Daly reaches more recent decades. He delves into the Canadian college game and how top-level college basketball operates on a far smaller scale than in America, causing many talented players to head south sometimes as early as high school. The chapters describing professional basketball were especially interesting, such as the various and sometimes harebrained efforts to create Canadian leagues and bring semi-pro teams to the country, which generally did not fare well. Daly also covers the country's attempts to lure an NBA team, an athletic asset the country lacked after the Toronto Huskies' quick demise. It was quite a difficult task to land an NBA franchise, and cities had to contend with roadblocks such as Ontario's reluctance to ban basketball betting (a term for obtaining an NBA franchise set by the gambling-averse David Stern).

And of course no book on Canadian basketball would be complete without the obligatory Steve Nash chapter. Daly's profile on the (Johannesburg-born, though he moved to British Columbia as a baby) star and his development from a unheralded Canadian high-schooler to NBA MVP is excellent. As with every subject in the book, Daly covers all the bases on Nash including his remarkable tenure at Santa Clara University. Daly clearly demonstrates a passion for the sport throughout the book and this is made evident through his extensive research and well-written accounts of on-court action.The prose is refreshingly well-crafted and occasionally witty and Daly is a gifted writer despite his excessive usage of "quarterbacking" in describing Nash's basketball exploits. As you would probably expect from a Canadian basketball fan, he ends the book with a rosy outlook on the future of Canadian basketball, which all biases aside seems like a reasonable assumption given the influx of Canadians stars such as Kansas' Andrew Wiggins and Anthony Bennett, the latter being selected first overall in the 2013 NBA draft.

Canada's Other Game is a comprehensive history of Canada's involvement with basketball that is a worthwhile read for the curious basketball fan. I lost some interest after the Naismith chapters when Daly recounts tales from some of the very early days and teams of the sport and small Canadian regional rivalries (there were some times such as with the Edmonton Grads section where I wish Daly was less generous with his facts and information) but the book really picked up steam as it approaches the present. As an American a lot of the information was new to me but Daly certainly has mined enough sources and done enough research to please the Canadian hoops fan as well.

Full Disclosure: The nice people at Dundurn Press sent me an advance ebook version to review.
Posted by Matt Lieberman at 12:52