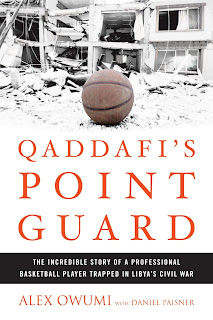 Qaddafi's Point Guard on Amazon (Release Date: October 1)
Searching for "Incredible Story" in the Amazon Books department yields 7,397 results, demonstrating that publishers appear quite keen on pushing products on unbelievable and extraordinary people and stories. Rodale Press adheres to the tactic with Alex Owumi's Qaddafi's Point Guard, subtitled "The Incredible Story of a Professional Basketball Player Trapped in Libya's Civil War." Not to discredit the thousands of books professing to tell incredible tales (though I will call National Geographic Kids out for embellishing things a bit with Saving Yasha: The Incredible True Story of an Adopted Moon Bear) but the story at the heart of Owumi's book is honestly one of the most amazing sports stories I have ever read. Owumi was born in Nigeria, attended high school and college in America, and then bounced around the foreign circuit until he ended up playing pro ball in Benghazi, Libya. His team was bankrolled by the Qaddafi family and Owumi found himself in the middle of the toppling of Muammar's regime. Equal parts memoir, travelogue, and survivor diary, Qaddafi's Point Guard is consistently engaging and captivating.

The book is initially framed around the early events of the Libyan Revolution in February 2011. The author was residing in Mutassim Qaddafi's (Muammar's son) relatively regal apartment, which in addition to being located close to downtown, the practice facility, and arena was near ground zero for the revolutionary activities in Benghazi. Confined to his building without power or any kind of internet connection, Owumi witnessed a slew of atrocities on the streets and to his own neighbors within the building. He even has soldiers break into his own apartment. These passages are told as brief diary entries and are interspersed between autobiographical chapters on his earlier life and career. Owumi is concerned with answering two equally-intriguing questions in his book: what is it like to be Qaddafi's point guard and what path in life does one take to end up in such a position?

The first few chapters describe Owumi's early years and how he went from playing basketball with soccer balls and milk crates growing up in Lagos to starring in high school football and basketball in Massachusetts. Though courted by several top-tier football and basketball schools, he wanted to play both sports competitively in college and thus compromised with a football scholarship to Georgetown that came with preferred walk-on status to the basketball team. After a disappointing year on the gridiron followed by failure to crack the Hoyas' basketball roster, Owumi bounces around two community colleges before finishing his career playing basketball for Alcorn State, where his teams were roundly destroyed by both Kevin Durant and Blake Griffin. After going unselected in the NBA draft, he plays overseas in France and Macedonia. I found the sections on foreign professional basketball to be fascinating look at how different countries' quirks manifest themselves in the professional basketball sphere, such as how Macedonian arenas were unheated and featured flaming trash cans by the baseline to warm players before games.

After getting fed up with the violence and disorganization of Macedonian basketball, Owumi contacts his agent to land him elsewhere, and he eventually receives an offer to play for Al-Nasr Benghazi, a Libyan club funded by the Qaddafi family. Owumi unfortunately does not really divulge too many details about his actual tenure with the team and experiences in Libyan basketball. He does mention, however, that if the team had a losing streak they faced beatings from Qaddafi thugs that would undoubtedly make even Mike Rice blanch. You can't blame Owumi too much for his brief summary of Libyan basketball because the Libyan Revolution occurred shortly after his arrival.

Owumi's story catches up with the framed diary entries about halfway through the book. At this point Qaddafi's Point Guard goes from a snapshot of the life of an international basketball journeyman to a harrowing tale of survival and escape. I'm not going to provide any spoilers (though it should be obvious that he survives the ordeal) but Owumi's account of the revolution is just ridiculous. Here is someone holed up in an apartment owned by the Qaddafi family filled with pictures of the patriarch surrounded by the overthrow of their regime. He has no water or power and he is subsisting off of roaches, worms, and accumulated muddy rainwater from a flowerpot for days on end. As noted at the start of my review, "incredible" is thrown around quite a bit in describing books, but it is absolutely warranted in the case of Owumi's escape from Benghazi and all of the hurdles he had to overcome.

Basketball is obviously thrown to the wayside while Owumi deals with more pressing matters such as ensuring his survival, but the book ends with him joining his former Al-Nasr coach on an Egyptian team. Attempting to decompress and put his life together after finally escaping Libya, Owumi is thrown on a team in the middle of the playoff hunt, and the book ends on an absurdly positive note that may well send Hollywood executives banging down his door.


While it touches on a geopolitical event that found more real estate in Foreign Policy and The Economist, Qaddafi's Point Guard was published by Rodale Inc and seems aimed firmly at the Men's Health demographic. The prose is light and conversational and the book moves at a very fast pace. While I never lost interest, I instead wish that Owumi provided more insight into his overseas career, especially in Libya. To my knowledge, Libyan professional basketball is rather uncharted literary territory and I greatly enjoyed its brief overview. This definitely is not the most insightful or best-written basketball book out there, but the story is so gripping that these flaws don't detract from the book too much.


In Sum
Qaddfi's Point Guard is an entertaining and engrossing account of foreign professional basketball and one man's escape from the Libyan uprising. While it is held back in places by its simplistic and basic narration it is still an outrageous story and Owumi's flight from Libya is exciting enough to make the book appealing to more than just sports fans.

Full Disclosure: The nice people at Rodale Press sent me an advance ebook copy of the book to review.
Posted by Matt Lieberman at 15:51