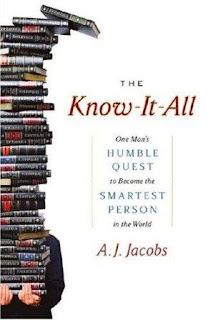 The Know-It-All on Amazon
Napoleon Bonaparte was an avid ice skater.

"Wicked Bibles" were published in Britain in 1631, which neglected to include the word "not" in Exodus 20:14, thus creating the commandment "Thou shalt commit adultery."

Did those three factual tidbits entertain you? Does the prospect of reading 400 pages of similar fare interspersed with some memoir-ish reflections and anecdotes appeal to you?  If your answers are in the affirmative then you will probably enjoy The Know-It-All by A.J. Jacobs. The book chronicles Jacobs' attempt to read the complete Encyclopedia Britannica and his more-difficult task of keeping the reader interested during the whole affair. Jacobs' largely succeeds with the latter, and The Know-It-All is a worthwhile read to anyone looking for a light read instilled with plenty of trivia.

The idea was sparked out of Jacobs' wish to reengage with his intellectual side, which had been languishing a bit due to his job as a magazine editor for the likes of Entertainment Weekly and Esquire. Jacobs has found his niche in the "stunt journalism" genre, as his other books include Drop Dead Healthy (where he attempts to become the healthiest human ever in a highly readable and engaging fashion) and The Year of Living Biblically (where he attempts to become the most Biblical human ever I guess, I haven't read that one yet). Reading the encyclopedia (when some skimming is inevitable) clearly is a bit pedestrian in comparison in terms of total commitment and strenuousness. Realizing this, Jacobs doesn't really focus much on the physical act of reading the volume, though he does mention several times that it is often incredibly boring and repetitive.  Instead, the book is largely a vehicle for Jacobs to riff on some fun facts he encounters, pursue some semi-relevant intellectual activities like attending Mensa meetings and playing chess, and reflecting a bit on the nature of intelligence and knowledge with some more personal passages.

The book is organized in a slightly unorthodox fashion. Every chapter covers a letter, and Jacobs recounts his efforts from a-ak (a genre of Korean court music) to Zywiec (a small town of 32,000 in Poland). Each chapter is further divided into individual entries, where Jacobs cultivates several usually fascinating factual morsels, such as the three that kicked off this review. There is never any drama regarding whether he will actually finish the book, which is appreciated given that he could really just have skimmed everything and we would be none the wiser. It's not like we the collective reading public were going to quiz him at the end or something. The format is mainly a success, as it still provides Jacobs with the freedom to tangentially relate particular entries to stories from his past or some of his scholarly field trips undertaken during his quest.

Tackling the Britannica, and describing how one goes about such an endeavor, is something that could easily fail in the hands of the wrong writer. Thankfully, Jacobs does a pretty commendable job of maintaining interest. Like Drop Dead Healthy, Jacobs and his immediate family and friends are featured prominently and these segments that focus on the author's attempts to one-up his intellectual brother-in-law help keep the book from becoming a mere list of random trivia. The Mensa meetings, school visits, and chess games also break up the monotony, though some asides such as Jacobs' appearance on Who Wants to Be a Millionaire (the book was published in 2004 when the show had already passed any shreds of cultural relevance or importance) fell a bit flat. But overall Jacobs does an excellent job touring the reader through the highlights of the Britannica and the prose is snappy, light, and self-effacing, something he has likely perfected through a career in magazines. While the book is facetiously titled and Jacobs often makes light of his deteriorating levels of "useful" knowledge, he does let his more highbrow and Ivy League education show during some clever and legitimately funny sections. I felt that the book lost some steam near the end but that it was ultimately an engaging mix of memoir and trivia, in a very similar vein to Drop Dead Healthy, which I also recommend.


In Sum
If you are looking for some light reading and enjoy historical facts with some anecdotes and riffs on pop culture thrown in for good measure then you can certainly do worse than A.J. Jacobs' amusing and even sometimes witty The Know-It-All.