Book Review: On These Courts by Wayne Drash 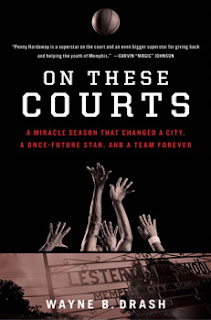 On These Courts on Amazon

On These Courts by Wayne Drash recounts former NBA star Penny Hardaway's efforts at coaching and mentoring the Lester Lions, a team of middle schoolers from a rough Memphis neighborhood to the state championship. Hardaway's involvement grew out of his friendship with the team's old coach, who was struggling with colon cancer and then the chemotherapy that followed. The book is an uplifting and inspirational chronicle of Hardaway's attempts to pursue a championship that eluded him during his professional career and more importantly protect his players from the temptations surrounding them. On These Courts tells a heart-warming story about a commendable individual and makes for a decent read. While it always kept my interest, the book is held back due to its somewhat generic approach to the "inspirational story about a ragtag inner-city team vying for a state title" genre that is a common topic in sports books and movies. It is still a worthy read, especially for basketball fans and high school and youth coaches.

Drash, a Memphis native, currently writes for CNN.com and actually played with Hardaway in a high school basketball camp. The book grew out of 2012 article he penned for the site about Hardaway's efforts at Lester. Sometimes books that evolve from articles can feel bloated or fluffed as writers awkwardly attempt to pass the length threshold from magazine feature to book but in this case the elongated format allows Drash to further explore the socioeconomics of Memphis and profile the disparate and often colorful characters inhabiting the team's rough Binghampton neighborhood. On These Courts truly shines when Drash focuses on off-the-court matters such as how Lester Middle School has always been a safe haven from gangs and graffiti artists and outlining the staggering obstacles (abusive parents, drugs, gangs) the players must contend with. Drash also is able to interview two gang members who offer surprisingly cogent insights into the trappings of gangs. The author also provides a rough biography of Hardaway and how he managed to rise from his surroundings (including being shot in the foot during college when he visited a gang-infested neighborhood) to stardom at the University of Memphis and eventually in the NBA. He was helped along by the discipline-heavy grandmother who raised him as well as several positive male role models and mentors, and he was able to develop from an academically-ineligible college freshman to a member of the dean's list with a 3.4 GPA.

The book is primarily focused on the 2012 campaign of the Lester Lions, initially coached by Hardaway's childhood friend Desmond Merriweather. Merriweather was beset by colon cancer and his condition became so bad that funeral arrangements were made and several of his players were erroneously told he had actually died. The coach was able to return to his duties after recovering but he eventually entered a joint coaching relationship with Hardaway after his friend took a strong interest in the team. Hardaway donates enormous amounts of his time into coaching the Lions, even though he has no obligations to do so (and he is doing pretty well for himself financially. He and Michael Jordan are the only retired NBA-ers who retain Nike shoe contracts). Hardaway knows the role that positive adult male figures played in his life and former star likely wanted to pay it forward to the next generation of Binghampton kids. Led by their stars Reggie Green and Robert Washington, the Lions seem primed for a run at the state playoffs under the guidance of their two coaches. Hardaway devotes even more of his time into mentoring his players outside of basketball and stressing the importance of academics to their lives, garnering some impressive results.

The fundamental elements of the book are certainly heartwarming and uplifting, but Drash is also treading on rather familiar territory to sports fans. Hardway's players even refer to him as Coach Carter, as the two share quite a bit in common, along with real-life coaches like Bob Hurley (subject of a recent documentary and book). This makes the execution of telling the team's story especially crucial in order to separate it from the rest of the genre, and it comes up short in some aspects.  Drash's prose is sometimes littered with cliches and lame similes, and the Lions' contest against a school located near the airport (bearing the unfortunate name of the Jets) brings out the worst in him as far as puns are concerned. While there is some profanity and the discussion of some violent and sexual happenings, there are points where it really read like a book for teenagers. Its not something I am going to ding the book for (teenagers should be allowed to have books written for them too) but it is something I feel that is worth mentioning. Thankfully (to make things interesting for the reader anyway), the Lions partake in many competitive games and do not simply drub all of their opponents and even lose a few games during the regular season. While Drash displays a keen eye for detail in describing Binghampton and his environs and clearly knows his childhood city well, his on-court passages are a bit dry and newspaper recap-y, making it harder to get emotionally invested in the action. There are also a few head-scratching strategic moments (particularly in the last game, though I wont spoil anything) that remind the reader that these matchups are ultimately being contested by thirteen and fourteen year-olds. Drash is much stronger when he describes off-court activities like the Lions' support in the neighborhood (including gang truces and carpooling grandmothers) and profiling Hardaway and several other talented Memphians who fell short of their NBA dreams.

Though the basic premise On These Courts will seem familiar to someone who has read their fair share of moving sports stories, I was entertained throughout and largely enjoyed the book despite its flaws. High school readers, coaches, hardcore basketball fans, and the 99% of the population that does not feel obligated to consume every book or documentary (both inspiring and otherwise) tangentially related to sports  will probably enjoy the book even more than I did. A portion of the book's proceeds will go to Fast Break Courts, Hardaway's program to assist at-risk Memphis youth.

Full Disclosure: I received a complimentary electronic copy of the book from Touchstone Publicity to review.