Book Review: Running for the Hansons by Sage Canaday 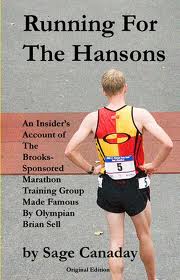 Running for the Hansons on Amazon

As the spartan, MS-Paint-esque cover might suggest, Sage Canaday's Running For the Hansons is a largely low-budget and unpolished affair. I even almost broke the book's binding the first time I opened the poor thing. It was edited by one of his teammates and is rife with spelling errors, excessive punctuation marks! and the prose is not always at a level above that of a LetsRun.com message board post. All that being said, I found the book to be an incredibly fascinating read that provided substantive insights into elite professional running programs and their training philosophies. As far as non-instructional nonfiction running books are concerned, I would honestly put it slightly behind Chris Lear's Running With the Buffaloes as my favorite of the genre in terms of pure entertainment value. I can't heartily recommend it to the general runner or reader, but if you fall into his rather niche audience you really owe it to yourself to give this a read.

The book is structured in a series of diary/blog entries that cover Canaday's first year in the Hansons-Brooks Distance Project. The program is led by Kevin and Keith Hanson, two brothers who run several running stores in the Detroit area in addition to their coaching duties. It is on a slightly lower tier than groups like Nike's Oregon Track Project but still boasts a roster of impressive athletes such as the Olympian Brian Sell and Desiree Davila. Canaday is coming off a decent college career at Cornell and decided to defer a "proper" career to take a shot at running professionally. Looking to qualify for the Olympic marathon trials, he is given an extensive training program culminating in running the Boston Marathon.

Canaday covers a wide variety of topics in the book. Many of his entries deal with his workout and the progress of his training, but he also diverges to topics like the history of the program, a typical day in the life of a Hansons runner, and profiles of some of his fellow runners. As an actual member of the team, Canaday has tons of access to the rest of the Hansons Project (the male ones anyway. The team has rather stringent regulations on commingling of the sexes) and he gets to pick his teammates' brains about their approach to running as well. He is really pretty comprehensive in describing the life of a professional runner. There aren't many areas that I wish he spent some or more time on, and additionally I don't think he spent too much time on one particular subject either.

He is refreshingly candid in describing his experiences with the Hansons. While he stayed an additional year after publishing the book, Canaday is not always completely satisfied with the lifestyle of a professional runner and makes this point known several times in the book. Canaday doesn't mesh particularly well with Michigan's more conservative culture and the countless miles prescribed by his coaches. Some of his pontificating can get a bit grating at times but it is generally kept under control. And while he doesn't have any real axes to grind (he ultimately seems pretty content with his situation all things considered) he does have some products to shill. As a sponsored athlete, Canaday's prose is peppered with references to his various Brooks training gear. Some readers might find this annoying but it didn't really bother me too much, especially since he just mentions his apparel rather than devoting countless pages extolling its virtues and why it is superior to all other brands.

There is a good bit of meat to the portions on his running and training. While I think a book like Hansons Marathon Method will be more informative in outlining the brothers' training philosophy, Running for the Hansons provides some insight into the brothers' views on training. I knew that the Hansons recommend shorter long runs than some other marathon plans, and learned that the reasoning behind it is that the program stresses cumulative fatigue built up from previous days more than other training plans. Canaday includes plenty of detail about his training and his coaches' elaborate plans to prepare him for Boston. And while Canaday is not always the most cogent or skilled writer, his passages describing the intensity of races and workouts stood out to me.

I am far more forgiving to the spelling errors and wonky writing found in Running for the Hansons because the book ultimately offers an incredibly desirable (to me anyway) unique selling proposition: a comprehensive behind-the-scenes account of the life of a professional marathon runner. He is writing from a pretty rare perspective and its not like this literary market is particularly crowded. While it is a bit messy and unrefined and has little to offer the average reader, if you are the kind of person who peruses LetsRun.com, runs marathons and follows those who do so professionally, and knows who Sage Canaday is, you really owe it to yourself to pick up Running for the Hansons for the sheer entertainment value it will offer to you.