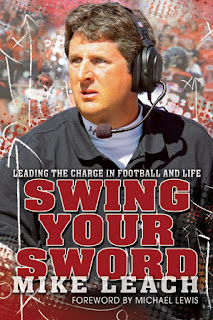 Swing Your Sword on Amazon

Mike Leach has always struck me as an interesting guy who possessed the courage to challenge football's status quo and the intelligence to really innovate the game. I started reading his memoir Swing Your Sword with the hope that he would provide a glimpse into his unconventional coaching methods and strategic philosophy in a readable package. And he certainly does offer up a good bit of insight into his views about football and running a program and it makes for generally entertaining fare. The book unfortunately veers from that subject matter halfway through and descends into a mess of damage control and finger-pointing regarding the Adam James incident that led to his ouster at Texas Tech. I found the book to be a worthwhile read despite its rather glaring flaws but the second half occasionally bordered on unreadable for me.

While Leach often takes an unorthodox approach to gridiron matters the book follows a rather tried-and-true template for coaching memoirs. He offers up some amusing anecdotes from childhood and college and describes how experiences such as coaching youth baseball fostered his passion for developing talent and creative strategies to outmaneuver more talented opponents. Leach's followed one of the more unlikely paths to football coaching, as he played rugby in college and entered Pepperdine Law School after graduating from Brigham Young University. He was likely the only member of his class at Pepperdine to pursue a football coaching job after graduating law school (though Rick Neuheisel and Marc Trestman are other coaches with law degrees) and he bounced around various small schools and even endured a stint coaching a Finnish team where players often smoked cigarettes on the sidelines.

Leach eventually ended up at Iowa Wesleyan under the tutelage of Hal Mumme and began to really establish the philosophical basis for his wide-open Air Raid offense at Texas Tech. He followed Mumme around various gigs and reached prominence after helping Tim Couch put up pinball numbers as offensive coordinator at Kentucky. He proceeded to run the offense for Bob Stoops at the University of Oklahoma before signing on as the head coach at Texas Tech.

Leach is refreshingly honest and open about most of his coaching experiences. His book is more insightful than other coaching memoirs I have read, and his musings on the game were definitely highlights for me. He mentions how coaches have more leeway to really stray from the norm in the lower levels of college football, where there is more freedom from fans and boosters, and he also makes a convincing case for abandoning common strategies such as having mirrors for all of your plays (players can specialize in and get more reps from having one responsibility on a play) and having receivers line up on both sides of the field (based on the benefits of specialization again. Maybe it is the economics major in me but Leach's argument certainly makes sense to me). Now Swing Your Sword doesn't contain any diagrams or get into the nitty-gritty of his scheme to the extent of something like Ron Jaworski's The Games That Changed the Game, which may disappoint some Leach fans, but I was impressed by the amount of strategic content offered by Leach for a memoir. I definitely learned more concepts about the game than I did from most other football books, such as how receivers on "go" routes are open several times during their route while those running "curls" and the like are only open at the end of the route.

Leach's chapters on his tenure at Texas Tech are initially fascinating. He outlines how he constructed his program and built his coaching staff. The coach put an emphasis on graduating players and ensuring reasonable academic performance through punishments such as "The Tower of London," where players would answer a gauntlet of scholarly questions while running around the school's campus carrying a cinder block over their head. He also occasionally played mind games against his opponents, such as intentionally dropping a fake play sheet on the field before a game against Texas. The chapters touch upon highlights such as the Red Raiders' 2008 upset victory over #1-ranked Texas and their 31-point comeback win against Minnesota in the 2006 Insight Bowl and such reflections make for decent reading.

Unfortunately, I read the pages with a sense of foreboding that is somewhat common in football memoirs. I had the same feeling reading recent books by Michael Strahan and Rex Ryan. I knew that at some point Strahan would discuss his divorce and probably regale me with tales about how horrendous his ex-wife was and that Rex would eventually stop telling his amusing anecdotes from his assistant coaching jobs (overall I really thought Play Like You Mean It was a fine read for the admittedly low standards of the genre) and draft Mark Sanchez, and then probably spend way too many pages justifying why his decision was the greatest thing to ever happen to the franchise. As Leach moved from the Kliff Kingsbury to Graham Harrell era I realized that there was still a good bit of dead tree matter between my current location and the back cover. Correctly assuming that Swing Your Sword did not contain a 150-page index, I braced myself for an inevitably exhaustive account of the Adam James affair and Leach's firing from Texas Tech.

I'm guessing you are at least somewhat aware of why Leach got fired if you are reading a review of the coach's book. Basically it stems from Adam Jones, a Red Raiders receiver and the son of Craig James claimed that he was put in a dark equipment closet after suffering from a concussion, which resulted in a media firestorm (at least on ESPN) that ruined many a campus meal at college dining halls across the country. According to Leach, the administration (who are not very scrupulous people) used the overblown incident to fire him and avoid paying him a completion clause and negotiating a new contract. Honestly it does appear that Leach got somewhat of a raw deal in the matter, and as a human being I sympathize with him for falling victim to university politics. But as a reader I do not want to slog through way too many pages outlining every reason why Leach is innocent, how Adam Jones is the worst person ever (except perhaps his father), and the pettiness of Texas Tech Chancellor Kent Hance. I can't imagine that my complaining about it all makes for very compelling reading material either. So unlike Leach, I'll show some restraint and just hope I've made my point. The book concludes with the fired coach discussing his life without football and excitement at obtaining a fresh start with Washington State, but Swing Your Sword's last 100 pages are mainly just him explaining how he was mistreated by Texas Tech.

If you still haven't read the book at this point you probably aren't the biggest Mike Leach supporter in the world. You are more likely a football fan decently curious about whether his book is worth your time. And my answer to that is yes based on the strength of the first half, though you will be disappointed when it descends into damage control and complaining. Caveat emptor/library patron.