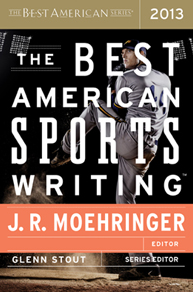 Best American Sports Writing on Amazon
It is impossible for all of the selections of The Best American Sports Writing to equally grip the reader's interest and keep them engaged. Different people have different tastes and preferences, and diverse collections such as this will inevitably contain a few articles that just don't do it for a reader for whatever reason. Unfortunately for me, the book started off with what I found to be one of the least compelling picks, Karen Russell's piece about a Spanish matador's gruesome goring injury and comeback. I have nothing against obscure sports but I simply didn't enjoy Russell's article all that much compared to the other picks. The collection is ultimately a solid mix of articles from a variety of sources from Deadspin to Sports Illustrated to The New Yorker. As is to be expected, the book is somewhat uneven but it does contain some true gems that make it a worthy read for sports fans.

Best American Sports Writing is surprisingly consistent from a thematic perspective, and the general themes of loss and deception make an appearance in many of these stories. Athletes are tragically struck down in their prime, steroids injected and pills popped, businesses go bankrupt, and team employees are wiretapped and mistreated, to name a few. Sometimes these stories celebrate perseverance in the face of adversity and tragedy, such as Chris Ballard's story in Sports Illustrated about a high school baseball team rallying to a state championship after the death of a star pitcher, and other articles like Jason Schwartz's account of the demise of Curt Schilling's gaming company are more bleak but not less interesting.Though there are some lighter pieces like Jeff MacGregor's clever appropriation of Waiting for Godot to examine the NFL lockout, the bulk of the articles are pretty dour.

Frank Deford has a great quote that "When people hear you're a sportswriter they assume you're more interested in the first half of that word than the second." And having read my fair share of sports media I can attest that I understand where these aforementioned "people" are coming from with such perceptions. Most of the book's articles are remarkably well-written, whether it is a sportswriter like Wright Thompson's ESPN article on Urban Meyer's efforts to balance family and football or Mark Singer's gripping New Yorker story about a Michigan dentist suspected of being a serial marathon cheater. Editor J.R. Moehringer culled from a wide array of sources, from longform stalwarts like The New York Times Magazine and the Washingtonian to more predictable sources such as ESPN the Magazine and Runner's World, and I enjoyed the mix. The book does not seem to be organized exactly by sports though several running and football articles are grouped in succession. The book tops out at almost 400 pages and while some of the articles didn't do a ton for me, I still found plenty of enjoyable material.


In Sum
Best American Sports Writing 2013 is a diverse and largely enjoyable collection of some truly excellent pieces on sports. I'm certain that there were some phenomenal articles on sports with upbeat and rosy outlooks printed in the past year, but they were generally excluded in this volume. Not all of the articles are equally interesting (which has to be expected really) and I found the book to be a worthwhile read and recommend it to any sports fans looking for quality longform on the subject.