Advance Book Review: A Nice Little Place on the North Side by George Will 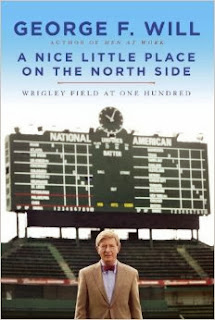 Wrigley Field was originally built in 1914 to house the Chicago Whales baseball team of the upstart Federal League. Over the next 100 years it has been the site of the second-most regular season NFL games in the league's history (behind only the old Giants Stadium), though the stadium is best known as the home grounds of the Chicago Cubs, who have been tenants since 1915. George Will's breezy A Nice Little Place on the North Side provides a history of the stadium's first hundred years and the monumental, quirky, and oftentimes incompetent events that occurred while the Cubs have called the friendly confines of Wrigley home. Authored by a lifelong Cubs fan with a passion for the game and an eloquent and knowledgeable writer (I definitely need to finally get around to reading Men At Work now), A Nice Place on the North Side is a tribute worthy of Wrigley's stature.

A Nice Place on the North Side is loosely organized into a series of short chapters on a wide-ranging series of topics. Will explores topics such as humanity's history with alcoholic beverages and the social history of Chicago, and such passages may come off as tangential in the hands of weaker writers, Will is usually able to segue nicely back into his primary subject matter. As such segments might suggest, the book is really about far more than a particular ballpark, and is really a reflection the Cubs and being a sports fan in general. Will views the field as a frame for viewing baseball, and while he acknowledges how Wrigley's idiosyncrasies affect the game (old owner P.K. Wrigley saw investing in stadium upgrades and emphasizing the general fan experience (the Cubs were also the first team to allow fans to keep batted balls that fell into the stands) as a more economically viable than paying top dollar for talent) he devotes most of the book to on-field events and the colorful characters who worked as Wrigley employees, from Cubs stars like Ernie Banks to concessionaires such as Jacob Rubinstein, who briefly worked as a vendor in the stadium and was known to place programs into unsuspecting fans' hands and then demand payment (Rubinstein later changed his name to Jack Ruby - yes that one).

The book is very well-researched and contains some fascinating trivia tidbits. While famous for its leisurely introduction of lights and night games, lights were originally supposed to be installed in 1942, but the already-purchased materials were donated to the war effort. In the twenties the Cubs used to let fans stand in the outfield grass behind ropes held by ushers. Fans would move back and pull the rope out (and thus the de facto outfield fence) when opponents hit long fly balls and pull the fence in when Cubs hitters would do the same. I don't know how novel many of the book's factoids will be to die-hard Cubs fans but as a casual baseball fan I found many of them compelling and they my favorite parts of the book. My only real quibble with A Nice Little Place on the North Side is that it is weaker on some of the ballpark's more recent history. Will always draws heavily from primary and secondary sources, but there are times when he leans especially strongly on mainstream (at least to sports fans) works like the 30 for 30 documentary Catching Hell when discussing the Steve Bartman incident and the excellent book Scorecasting in trying to explain the Cubs' overall ineptitude. Both sources offered plenty of insight into their subjects, but Will doesn't provide much additional analysis after summarizing them. Still, the book combs through some obscure and old materials and even major baseball historians should get quite a bit from A Nice Little Place on the North Side.

As Will elegantly states late in the book "baseball fans are disposed to live with cricks in their necks from looking backward." I have noticed that more than any other American sport, hardball fans are particularly interested in the history of the game and learning about the legendary players (and stadiums) of yesteryear. Any baseball fan interested in the game's past, regardless of rooting interest, should check out A Nice Little Place on the North Side. It is a quick and light read and Will is able to pack a good bit of history and interesting anecdotes into the book even with its brevity.