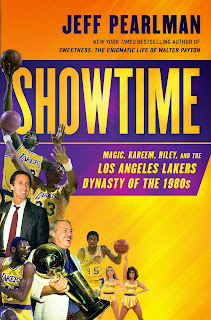 Jeff Pearlman has carved out a nice little niche for himself chronicling the more sordid off-the-field aspects of some of the most beloved teams and athletes of yesterday. From Sweetness, a very complicated portrait of Walter Payton that pulled no punches, to books such as Boys Will Be Boys (covering the athletic, litigious, and criminal exploits of the 1990s Cowboys and their staff) and The Bad Guys Won (doing much of the same for the 1986 Mets) the former writer for Sports Illustrated sticks to this rather sound formula for his latest book Showtime, a comprehensive look at the Los Angeles Lakers of the eighties. It is a solid effort that will appeal to basketball fans and readers interested in the glitz, glamor, and excessive amounts of sexual escapades and cocaine in the NBA of the 1980s.

Pearlman's books are generally longer than the average sports book (for what that's worth) and thus finding engaging subjects is especially crucial. The 1980s Lakers certainly deliver on that front.
The team was full of enigmatic and idiosyncratic players and leaders such as the womanizing owner Jerry Buss, the egomaniac head coach Pat Riley, the aloof and curmudgeonly Kareem Abdul-Jabbar, and the preternaturally charismatic Magic Johnson. I could go on but my sentences run on enough as it is. The book is filled with insights and anecdotes from almost everyone associated with the organization over the period and the first-hand accounts are really where the book shines. Chronicles of past seasons can often devolve into re-hashings of the major events of a few seasons without any real additional material provided. To fans of the franchises in question (presumably the bulk of the target audience for something like this) the entire book can feel like a tired recap of events that are already very familiar to them. Showtime is able to mostly avoid this pitfall by featuring constant commentary from individuals such as Magic Johnson and Jeanie Buss among many others. Some of the subjects are incredibly open with the author, especially Spencer Haywood, who admits to a strong cocaine addiction and attempting to have head coach Paul Westhead killed. So while there were certainly times where the season summaries blended into each other and I lost some of my interest, these instances were usually quickly ended by a truly entertaining story or trivia tidbit and the book would then get back on its rails.

Showtime is structured as a chronological history of the Lakers during the period ranging from 1979 (when Jack McKinney took over as head coach) to Magic Johnson's 1991 retirement announcement. It is equally interested in the team's on-field performance as it is with its extracurriculars, of which there were plenty. In addition to winning several championships and introducing "three-peat" into the sports lexicon (and US Patent office) the team engaged in heaping quantities of marital infidelity and featured a seemingly revolving door of truly strange characters (and I'm showing some restraint here by avoiding steering clear of an obvious central casting reference). The team once employed players such as Mark Landsberger who upon joining the team asked Pat Riley "do you guys have any rebounding plays?" and Earl Jones, a two time high-school All-American who decided to attend the Division II University of District of Columbia. Recollections such as how Jones decided to skip a practice and take a $100 fine rather than pay $50 for a taxi to the arena (interesting cost-benefit analysis there) were some of my favorite sections of the book. Pearlman also predictably devotes significant quantities of ink to stars such as Kareem and Magic and he is so meticulous with his research and approach that he is able to share quality material about them as well.

Overall, while Showtime lacks the shock value of a book like Sweetness (its not like there was ever a Spencer Haywood Man of the Year Award), it is a worthwhile read for basketball fans. Pearlman is a strong writer who diligently mined the media of the era to fill in any gaps from his plethora of interviews. I found some of his on-court descriptions to be generic at times which made the book drag during some portions but on the whole the book was an enjoyable read. There is also definitely enough new information here to appeal to even the most die-hard Laker fans.

Readers familiar with Pearlman's other books will know what to expect here. Showtime is a readable, informative, and entertaining look at the 1980s' greatest NBA team and their associated exploits. There may not be enough interesting material to propel a general sports fan through all 450+ pages but basketball fans will get a lot out of Showtime.