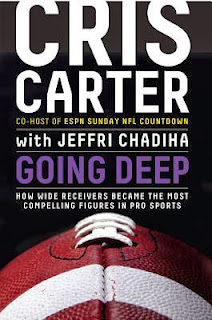 Going Deep by Cris Carter with Jeffri Chadiha is a conventional player memoir with some additional analysis of the recent evolution of the receiver position. While the second half of that premise may sound appealing, Carter's NFL reflections fall firmly into the realm of David Foster Wallace's mass-market "sports-star-'with'-somebody-autobiography and the sections on the position in general contain little original insight. There were a few interesting sections and the book was a quick and rather painless read but there is little for me to recommend for the general football fan because Carter is treading on very familiar territory.

Despite being subtitled "How Wide Receivers Became the Most Compelling Figures in Pro Sports" the book is primarily focused on Carter's playing days. He begins by noting the increasing prominence of wide receivers beginning with rule changes in the late seventies but then follows the rather generic template of the athletic memoir. Carter guides us through his youth career, college career at Ohio State, and sixteen years in the NFL with the Eagles, Vikings, and Dolphins. Thee are some candid passages on his dealings with agent Norby Walters that caused him to leave Ohio State before his senior year and enter the supplemental draft and dealing with substance abuse, but unfortunately even these portions are marred by pedestrian prose and cliched athlete platitudes common to the genre.

Carter does intersperse his life story with some analysis of the position in general.Carter did witness the transformation of the position first-hand over his sixteen seasons in the league, as players such as Jerry Rice, Terrell Owens, and Randy Moss and the development of the West Coast Offense and multiple-receiver sets changed how receivers were utilized and perceived on and off the field. He looks at several players who changed the position such as Owens, Moss, and current players such as Larry Fitzgerald and Andre Johnson. However, he doesn't go far beyond the surface level in explaining how this phenomenon came about. His sections on Moss and Fitzgerald are decent because he knew both players personally but in general he just recounts career highlights that will be familiar to the casual football fan. Going Deep feels geared towards the average fan and anyone looking into more insight into strategic developments on the gridiron should look to books such as Ron Jaworski's Games That Changed the Game and Tim Layden's Blood Sweat and Chalk. He does share a few amusing anecdotes about his teammates and a cogent overview on the increased emphasis of television promoting stars (Carter himself is an active participant given his current role on NFL Countdown) and I wish he devoted more ink to both.

Going Deep offers a few amusing insights but in general is a pretty generic account of a career in the NFL. It does contain some additional sections on the position in general but there is nothing new in Carter's explanation of the phenomenon, which is a shame given his knowledge and experience as a receiver. It wasn't a boring read and I finished it quickly but there is very little original content (especially to fans interested in higher-level football strategy) and thus I can't recommend it very strongly.