Book Review: How To Rap 2: Advanced Flow and Delivery Techniques 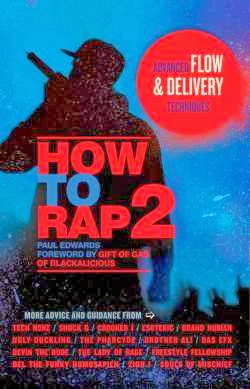 How to Rap 2 on Amazon

There are now plenty of online and literary resources analyzing rap music. These all seem primarily focused on content: metaphors, references, general subject matter, and the like. Some musical elements, however, don't particularly translate well to the written page/link-baiting website, namely delivery and flow and how those words actually sound. Paul Edwards' sequel to his 2009 book How to Rap attempts to fill this gap and does quite an admirable job. Similar to the first installment of the series, How to Rap 2: Advanced Flow and Delivery Techniques consists of a series of insights from rappers past and present opening up about their craft. This volume is completely based around flow and delivery. While it seems to be aimed squarely at aspiring rappers (and it is undoubtedly a valuable asset for that audience) there is plenty to like here for the general hip-hop fan on how to appreciate the music in a new way.

The book culls from over 100 interviews with a broad range of emcees. Edwards gets to the pick the brains of the likes of Chuck D, Big Daddy Kane, Aesop Rock, and E-40, among many others and the lineup truly runs the gamut of popularity and (American) geographic region. Most rappers are incredibly revealing about their methods and techniques. Highlights include Evidence from Dilated Peoples describing how the three-bar loop of "Worst Comes to Worst" and how Gift of Gab records and memorizes his rhymes to allow him to play around with delivery in the recording booth. Edwards is also far more than a silent transcriber, as he includes a plethora of flow diagrams (example pictured below) to illustrate his points and is able to mention abundant examples of the advanced techniques referenced in the subtitle. Some of his especially enlightening contributions include outlining how Nas links rhyme schemes on "N.Y. State of Mind" (very smoothly and cleverly, it turns out) or how Gift of Gab has to alter his rhyme scheme on the 3/4 beat of "Chemical Calisthenics."

How to Rap 2 is split into three main sections. The first concerns advanced rhythm techniques, including placing rhymes within bars, triplets, and punctuating different beats in bars. The second section covers vocal tones, delivery, and timbre, and the final portion goes over rhyme schemes in a more complex and comprehensive manner than the first How to Rap. Some sections are actually groundbreaking, such as Edwards' application of the "flam" concept (think DMX on "Who We Be") in percussion to rap flows. Rappers have been using this technique for quite some time but this is the first time someone is actually classifying and naming it. Often times most discussion about a rapper's flow begins and ends with a statement like "he sounds like he could flow for days." How to Rap 2 is able to give names to many methods that lead to entertaining flows and delivery along with rappers explaining how they employ such techniques. The book concludes with an index of consonant and vowel sounds to practice enunciation, which is the only portion that non-rappers might conceivably skip (though I did like guessing to see what songs would be used as examples).

How to Rap can essentially be seen as an introductory course into the craft of rapping, touching briefly upon all basic elements. Its sequel is more like "Advanced Topics in Rhythm and Delivery," expounding upon the more general flow and delivery content from How to Rap. The rapper interviews appear to all be from the same session that yielded the first book, but re-hashing is kept to a minimum and most of the book covers new territory. I also don't have any issue with assembling these journalistic b-sides into a new book, as it would have been a real shame if they never saw the light of day. And the fact that Edwards was able to create a 200-plus page book from interview snippets about one specific topic makes me excited for future installments in the series. While the author does occasionally fall victim to beating home some rather straightforward points (I think its a bit of explanatory overkill to mention that Pharoahe Monch ends a bar on "Maintain" with a low pitch because "the MC is serious and talking about a serious subject") and I don't entirely understand the frequent references to page numbers of the first How to Rap given that almost every flow and delivery topic is covered more in-depth in this current volume, these are minor quibbles. Ultimately, How to Rap 2 is a fun, fast, and enlightening read that is really essential reading for any aspiring rapper or fan of the genre. It explored new elements of the genre that made me want to return to albums I had listened to a thousand times already to explore their rhythmic and tonal elements with a new perspective and vocabulary.


In Sum
Anyone looking to delve deeper into the rhythm and sounds of rap owes it to themselves to pick up How to Rap 2, especially if you enjoyed the first book. The rappers are all remarkably candid and insightful about their processes and Edwards is an excellent guide through the realm of rhyme schemes, vocal tones, and complex rhythms. Fans should not be dissuaded by the title, as there is plenty to like for anyone with an interest in hip-hop can learn and appreciate a lot from this book.

Related Reading: Good Books About the Craft of Rap
How to Rap by Paul Edwards
Check the Technique by Brian Coleman
Book of Rhymes by Adam Bradley
Posted by Matt Lieberman at 14:04