Book Review: Keepers of the Flame by Travis Vogan 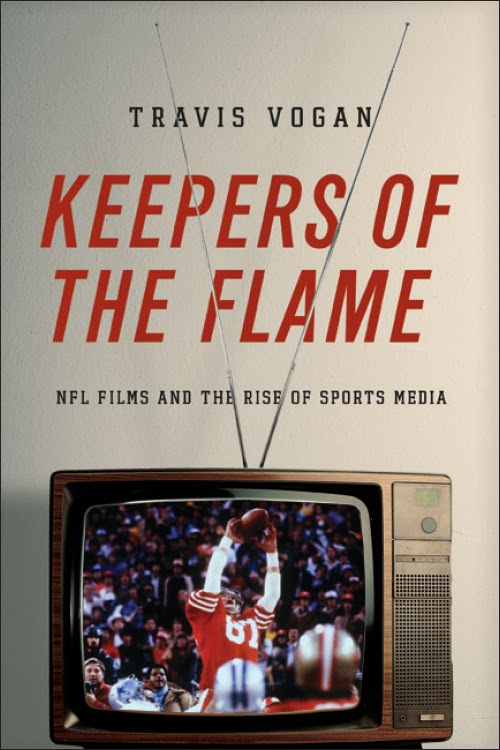 Keepers of the Flame on Amazon
Think about the seminal moments in NFL history. The Catch. The Immaculate Reception. The David Tyree catch that for some reason still lacks a catchy nickname. Imagine these events in your head. Do you have any idea of what the live television footage of those plays were like? You might be able to conjure up some vague recollections of what Tyree's catch looked like, but in general I'm guessing this was a pretty tough task. You are likely far more familiar to NFL Films' footage of such events, and the company has been documenting and canonizing professional football games since tiny Blair Motion Pictures won the rights to the 1962 NFL championship game. Travis Vogan's new book Keepers of the Flame documents the history of NFL Films and analyzes the evolution of sports media. Written by an academic and published by the University of Illinois Press, the book is appealing to football fans both inside and outside the ivory tower thanks to Vogan's extensive research and original subject matter.

The first aspect worth mentioning about Keepers of the Flame is that it takes a more scholarly tone than the average football book (for what that's worth). Vogan is an assistant professor of journalism and mass communication at the University of Iowa and his book is clearly intended to contribute to the academic discourse of football, sports media, and the business of sport. It has the somewhat detached emotional tone common to scholarly books and cites some deep thoughts by sociologists and cultural critics about the documentary form and role of media. That being said, this isn't a treatise on monetary economics or something. I would have definitely tried to take a class with Vogan had I attended Iowa and by that same logic I decided to pick up Keepers: I think the fundamental subject matter is fascinating and I want to learn more about it. So don't let the nature of the book dissuade you from reading it if you share my interest in the subject matter.

Vogan starts out with an exceptional and extensively-researched section on the history of the Sabols and NFL Films. Steve Sabol has been featured in the "A Football Life" series on NFL Network and the history of NFL Films has been covered in books such as America's Game by Michael McCambridge but Vogan's treatment is by far the most comprehensive and interesting. The Sabols were a pretty eccentric bunch, as Keepers outlines anecdotes such as Steve Sabol's quixotic Heisman campaign has a backup fullback at Colorado College that included local newspaper ads, postcards, t-shirts, and buttons and managed to fool the (presumably incredibly inattentive) local sportswriters to name him to the All Rocky Mountain Conference Team. Outside of these factoids, Vogan also presents the best history of how humble Blair Pictures managed to eventually become the media behemoth that is NFL Films. The history chapter reads like an excellent longform magazine article and stands well by itself.

The rest of the book examines topics such as the aesthetics of NFL Films' productions and the company's role in elevating the league and its players to the greatest heights of importance. The Sabols were meticulous auteurs (with quite a bit of cultural literacy and included some highbrow references to works such as Akira Kurosawa's Rashomon in their movies) and went to great lengths to present works of artistic merit. Vogan outlines signature elements such as the "tight on the spiral" aerial footage of the prolate spheriod and microphoning of players and coaches, a first among sports media entities. One benefit of reading academic authors is that they generally leave no stones unturned in their research, and Vogan is no different. He had access to Steve Sabol and was even granted the opportunity to visit NFL Films as often as he wanted. He also was able to sit down with producers, archivists, and administrators at NFL Films and the Pro Football Hall of Fame. This allows for some great original insights and trivia,  such as how NFL Films' reliance on 16mm color film has made them Eastman Kodak's largest current client and the intricacies of the complex SABER system used to classify game footage which includes subcategories such as "Sweat," "Praying," and "Torn Uniforms."

Vogan spends a substantial share of the book writing on NFL Films' role as acting as a historian and propaganda arm for the league. Their productions allow the game to achieve a higher level of significance compared to other sports and seem more consequential in general. He also analyzes major films such as "Big Game America" for their portrayal of the sport and its athletes and how they were influenced by the current culture. People definitely took NFL Films' highlight films seriously, and in the 1970s the Pennsylvania State Legislature even passed a resolution censuring Monday Night Football because the NFL Films highlights that ran during halftime were apparently Steelers-deficient. Vogan concludes with a look at NFL Films today and how it is adapting to a shifting media market and trying to avoid obsolescence by aiming for a niche role and seeking out older audiences.


In Sum
I am not an academic and I didn't read Keepers of the Flame to cite it in a college essay or thesis or something. I simply picked it up because to my knowledge NFL Films hadn't yet received a full book treatment and it seemed like it would be an interesting read. Travis Vogan ultimately delivers a very well-researched and often illuminating look at an NFL cultural institution. Understand that while this book is academic in tone and quotes people like Pierre Bourdieu, it is still a great read for anyone interested in NFL Films and the history of sports media.