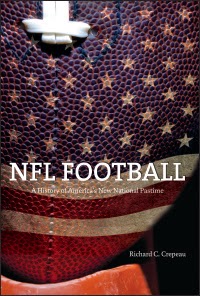 Books can't really be read in a vacuum. Every work I pick up is inevitably assessed in comparison with other similar pieces. So while Richard Crepeau's NFL Football is a decent examination of the NFL's history and how the league been impacted by (and impacted) American culture and economics, it pales in comparison to other books on the subject and thus I can't recommend it incredibly highly.

Crepeau is a history professor at the University of Central Florida and has written a past book on baseball's history. According to BaseballReference.com, he is also apparently on the shortlist to succeed Bud Selig as MLB Commissioner. Despite his academic day job (for now anyway), NFL Football is a largely readable account and its numerous citations generally come from mainstream books and media sources rather than abstruse scholarly texts. Some sections are a little dry but that is more due to familiar content rather than an overly-scholastic tone. The book proceeds through a chronological overview of the league with a large emphasis on the economics and culture of the NFL. He covers major league events, the exponential growth of television revenues, staggered integration (thank you George Preston Marshall) and hits the major figures like Pete Rozelle and Jim Brown with some in-depth passages. There are no glaring omissions and all major bases are covered, but much of the material is going to be old hat for a reader willing to read a history professor's account of the league. The book somewhat curiously concludes with a chapter on the history of the Super Bowl that outlines its evolution into an exorbitantly expensive festival of athletic excess.

Crepeau presents NFL Football as a synthesis of literature on the NFL's history and as a result leans heavily on preexisting sources. Unfortunately, this approach leaves the book largely bereft of any original analysis. There were no interviews conducted for the book and he culls much of the content from popular works so fans of the sport may not find many new insights. Crepeau includes extensive quotes from books such as Michael McCambridge's America's Game that are more comprehensive and entertaining accounts of the same subject. NFL Football does occasionally shine when Crepeau digs a bit deeper for more obscure and older sources demonstrating the culture of the league and era such as a 1971 Sports Illustrated article that purported a slew of anthropological and physiological reasons for black athletes' dominance in the NFL and a 1969 SI piece about drugs in sports.

NFL Football gives a broad overview of an expansive subject. It does an adequate job at its stated goal of synthesizing the existing literature on the topic but offers little in the way of original content and I feel that other books such as America's Game do a better job outlining the history of the NFL.