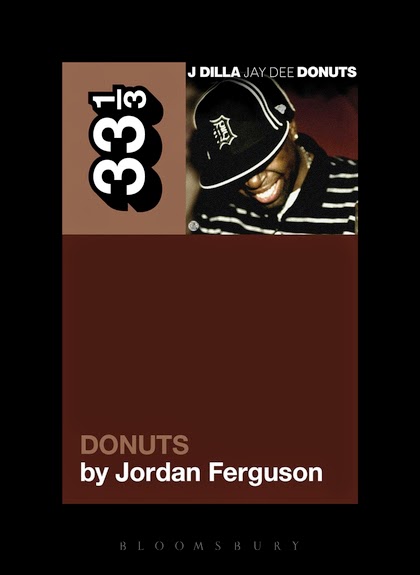 The 33 1/3 books have always struck me as a brilliant idea with somewhat spotty execution. The books generally follow the same formula: analyzing a seminal album in 100-200 pages of insight, interpretations, and/or the historical context of the work. Each book is penned by a different author with a different approach, so naturally there is considerable variation in quality. As someone who really likes to dig into albums deserving of such mental exertion, I much enjoyed the books where everything works (like Ben Sisario's excellent take on Doolittle) and was considerably disappointed by some of the more needlessly abstruse (OK Computer) or autobiographical (Wowee Zowee) installments. Thankfully, Toronto freelance journalist Jordan Ferguson's examination of J Dilla's 2006 album Donuts is a well-organized and illuminating read on one of the best instrumental hip-hop albums ever.

Donuts is a scattershot collection of beats that jumps from one idea to the next and pulls the rug out from the listener just when they are getting comfortable. It makes for a great listen, but thankfully Donuts the book is comprehensive and fully-developed. Ferguson follows the popular 33 1/3 format of beginning with historical background and the artist's career progression leading up to the album before delving into its actual content. Much of the first half of the book consists of an extended biography of Dilla and his development as an artist. The book draws from a wide array of interviews, articles, videos, and other sources on Dilla as well as the history of the Detroit music scene. The strongest point of Donuts is Ferguson's comprehensive research. Dilla fans may already be familiar with some of the anecdotes and interviews referenced in Donuts (which is to be expected to some extent), but there is likely quite a bit of new material unless you have seen every YouTube video, Frank-N-Dank DVD extra, and read every random article on Dilla. The book greatly benefits from the fact that Dilla (and his mother, who is also featured prominently) was very revealing and engaging in his interviews. He goes into considerable detail on his craft, philosophy, and his personal history and artistic evolution. Ferguson also conducted some original interviews while writing the book. He got time with Eothen "Egon" Alapatt, the former general manager of Stones Throw Records who was instrumental in releasing Donuts as well as Stones Throw art director Jeff Jank. These provide additional insight into Dilla's personality and how Donuts came together.

Ferguson focuses on the album in the latter third of the book. He is a very attentive listener, pointing out small yet important details of the album. I've listened to the album countless times and I never realized that while the album concludes with a reprise of the introduction, there is a stutter that causes a jerky transition between the two. Fergsuon goes on to explain how this plays into Dilla's affinity for samples with "mistakes" in them. Many hip-hop reviews turn into extended lists of sample sources possibly to flex their sampling knowledge muscles/Googling proficiency, and this risk is clearly elevated when dealing with an instrumental album like Donuts. There is a point to every sample Ferguson points out, whether it is to highlight Dilla's eclectic (I had no idea he was a Stereolab fan) musical tastes or his knack for seamlessly integrating disparate sources into his beats.

While Ferguson rightfully heaps Dilla with a ton of (much-deserved) praise, especially with his gift for rhythm and drum programming, need for constant innovation, and disregard for the conventional rules of hip-hop production, Ferguson never enters mindless fawning territory, another common misstep in 33 1/3 books. He is refreshingly even-handed throughout, noting (also much-deserved) critical swipes at his rapping ability and some weaker moments in his discography. Ferguson's passion for his subject is evident throughout and he is clearly very knowledgeable about sampling and hip-hop music in general.

In Sum
Donuts is definitely one of my favorite entries in the 33 1/3 series and is a worthwhile read for any fan of the album. There are a few brief passages where Ferguson rambles a bit on critical theory but in general he held my interest throughout and offered a hefty bit of background on and more reasons to appreciate one of my favorite albums of the last decade.