Book Review: How Music Got Free by Stephen Witt

Bats Are Not Bugs Header of Book Excellence

On Amazon  | On Goodreads

Like most people, I imagined that the gradual dismantling of the music industry through filesharing was largely the result of the collective pirating conducted by hordes of music lovers/looters across the world. So while I enjoy music and books on the subject (and even still buy CDs for some inexplicable reason), I wasn't expecting any earth-shattering insights from Stephen Witt's How Music Got Free. As Witt points out in the introduction to the book, however, this massive change was actually largely driven by surprisingly few actors. In fact, he is able to chronicle the entire saga from the early 80s through the birth of Spotify by focusing on three individuals. How Music Got Free provides an incredibly entertaining account of the birth of the mp3 and the cultural and financial impact of everybody's favorite compressed audio file type.

Witt's three subjects run the gamut: Doug Morris, a top record label executive, Karlheinz Brandenburg, the German researcher largely responsible for developing the mp3, and Dell Glover, a humble "black redneck" from North Carolina who leveraged his job at a CD factory to become perhaps the most prolific leaker in music industry history. He deftly weaves between these threads in a large chronological fashion in chronicling the creation of the mp3, its fight for file-type supremacy, and how it turned the profit model of the music industry upside-down.

This approach keeps things fresh and allows Witt to dive deeply into a variety of diverse topics. How Music Got Free is almost three books in one: an analysis of psychoacoustics and file compression and how Brandenburg and his German research team were able to create the mp3, a case study on the business impact of the file-sharing revolution and how music executives (very, very, slowly) adjusted to the sea change in listening habits, and a thoughtful profile on Glover's leaking pursuits and a true-crime tale of the rise and fall of his circle of leakers. The book greatly benefits from extensive interviews with most major players, allowing Witt to really flesh out major characters and get some deep insights. How Music Got Free focuses extensively on Glover, and Dell's story is both engrossing and presented in a thoughtful and objective matter. The pirates aren't lionized as class-warrior heroes sticking it to the big record execs, and the big record execs aren't vilified as cruel and heartless automatons (well at least not all of them anyway). Witt is remarkably thoughtful and objective throughout, despite a few moments of snark (I guess I'm just angry he described Björk as a "scene queen").

Witt is a journalist with a mathematics degree from the University of Chicago and actually once worked as a hedge fund trader. That last fact probably explains why he is able to go into such lucid detail on the business strategies of major record labels. Witt also has a journalism degree from Columbia, which is likely why all of his descriptions, from how compressed files take advantage of neurological quirks of how the brain listens to music to lower file sizes to the legal messes the leakers got themselves into, manage to strike the difficult balance between being clear and detailed.

While the prose suggests a Wired feature, How Music Got Free doesn't ever feel like a bloated article. Unlike some of the insipid commercial full-lengths released in the 90s and early 00's that contributed to the death of the album, there is no filler here.There is definitely enough material to justify its length, and I almost wish that music took a bit longer to self-destruct so How Music Got Free could add a few more chapters, though I don't want to suggest that the book isn't comprehensive. Overall, How Music Got Free is a great read that will probably go down as my favorite book published in 2015. If you have any interest in music or business or even just want to read an entertaining story about one of the biggest culture shifts over the past 20 years you should definitely pick this book up. 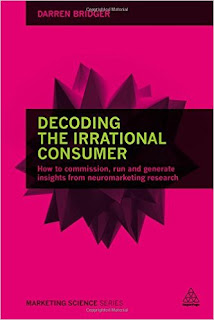 One of the exercises brands like to do is the consumer journey. This basically consists of outlining a pretty linear process of how the consumer eventually gets to purchasing your product. For some brands this makes sense, and for others less so. Regardless, consumer behavior in reality has a pesky tendency to stray away from that neat model. Decoding the Irrational Consumer by Darren Bridger outlines how consumers don't always behave in the most rational way and offers neuromarketing methods to help account for and understand these messy purchasing processes.

The book is essentially a tour of all the current neuromarketing capabilities out there and their benefits and how they should be deployed. Bridger is an experienced neuromarketing consultant and a very capable guide through the likes of facial action coding and psychometrics. Each chapter dives into a different neuromarketing tool and the science behind them and use cases. It is a great way to learn about how brands are actually leveraging such tools, such as how the retailer Tesco used eye-tracking studies to identify undervalued print placements and improve the efficiency of their media buys. Concrete examples help marketers reading this book actually envision how they can incorporate such studies to their own brands.

Bridger isn't afraid of science or academia and he frequently references studies from a variety of disciplines in demonstrating the benefits of such services. While one would naturally expect him to be bullish on all such research, he is very fair-minded and describes the pros and cons of all methods, such as how EEG studies are great for immediate feedback but can't really measure long-term effects particularly well.

Decoding the Irrational Consumer is definitely designed to be a practical and instructional read and I think it does a fine job at that. And if you are really interested in marketing and getting the lay of the land of some of these cutting-edge tools this makes for a pretty good pleasure read as well.