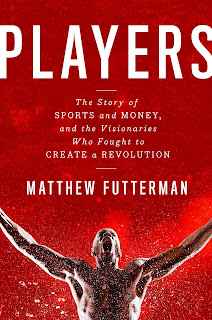 Major league sports is big business. I don't think any metrics or factoids are necessary as this is a rather uncontroversial and unsurprising assertion. What's more interesting is that this wasn't always the case. Major ballplayers often had to supplement their relatively meager athletic incomes with side pursuits until fairly recently. For example, Roger Staubach earned less as the rookie starting quarterback of the Dallas Cowboys than author Matthew Futterman's father did working as an assistant lawyer for the U.S. State Department, and this tidbit served as the impetus for Players, Futterman's examination of the emergence of athletics as big business and how NFL starting quarterbacks eventually came to out-earn government lawyers by several million dollars. The book provides an overview of the major developments in major sports that helped spur this change as well as profiles of leading figures driving the movement.

Players is roughly segmented by sport: there are chapters on Nick Bolletierri and the evolution of the sports training academy, Catfish Hunter's fight to become a free agent, and how the creation of the NFL's Quarterback Club brought in huge sums to the league's gunslinging stars (but actually siphoned off revenue to the NFLPA), among others. Despite what the title might suggest, non-athletes such as agents and trainers played a huge role in the growth of sports business, and there are extensive profiles of Arnold Palmer's agent Mark McCormack (a Cleveland lawyer who eventually founded sporting industry megalith IMG) and former MLB union head Marvin Miller and how they were instrumental in growing sports as a business. Roughly half of the book is devoted to sports outside of America's big four, with extensive chapters on golf, tennis, and the Olympics, and the evolution is tracked in a loosely chronological fashion.

Players shines when it touches upon less popular sports and draws from interviews and detailed first-person accounts. Futterman writes for the Wall Street Journal's exceptional sports section and is a strong writer who is just as comfortable explaining the subtle mechanics of Jimmy Arias' forehand as he is describing the tax implications underpinning why Arnold Palmer deferred his tournament bonuses from his sponsors. Additionally, Futterman was able to parlay his industry connections to get interviews with the likes of Bollettieri and Bill Bradley for insider accounts of the movement. The chapters drawing heavily from interviews and exclusive content were more engaging to me than those on more recent topics such as cable sports networks that leveraged more familiar subjects and works such as the oral history of ESPN Those Guys Have All The Fun that I had already read.

The one-sport-per-chapter approach gives the book a somewhat disjointed feel, as many passages touch upon some common themes found in other sports (such as a shift to more player-friendly free agency policies) that don't get fully explored. The section on multi-team cable television channels naturally does cover several sports, but other chapters suffer from this organizational structure. Futterman also restricts most of his analysis to American athletes, with only brief mentions of foreign leagues, which was a bit of a bummer. Maybe it's because I work at an ad agency, but I also wish Futterman went into more detail on how brands began to get comfortable with and then openly embrace associating with athletes, as these sponsorships were a major factor in raising incomes for marquee athletes.

While there are a handful of books chronicling the economic growth of particular sports, Players is one of the few books with the ambitious goal of chronicling the business growth of all major sports. Its sport-specific chapters prevent it from presenting a clean and all-encompassing narrative (not that there really is one, I fully understand there were some sport-specific factors at play), but it does a fine job and outlining the major forces behind the movement. It will impart a good bit of knowledge on the subject, especially some of the older topics that will probably less familiar to readers, and it is a solid book overall. I don't think Players is strong enough to recommend to a sports fan with only a passing curiosity in the subject, but if you are someone who reads the Wall Street Journal and its sports section and/or finds Futterman's premise appealing you should give Players a look.