Advance Book Review: This is Your Brain on Sports 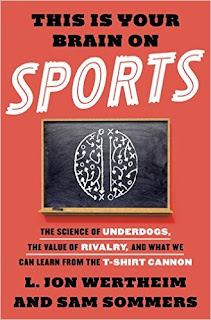 Wertheim is no stranger to breezy social science/sports crossovers, having co-authored Scorecasting, which challenged conventional sports wisdom with some number-crunching, with University of Chicago economist Tobias Moskowitz in 2011. While some its conclusions may not have passed muster with peer review panels, it was a fun and occasionally enlightening read. This is Your Brain on Sports is not really a sequel to Scorecasting as the focus has shifted from analytics to psychology, but it follows a similar template and is just as entertaining.

This is Your Brain on Sports focuses mainly on individual and group behavior: why do many athletes make morally-questionable decisions (and then rationalize them in an almost-humorously inept fashion), why do so many nonpartisans pull for the underdog, why are coaches seemingly always on the hot seat? The authors use these discussions as a springboard to share some revealing psychological studies that both help explain the phenomenon and improve our general understanding of human psychology. In most of these cases, the conclusion is that while we may not compare physically with these non-Bartolo Colon professional athletes, these quirks illustrate some broader conclusions of human nature that certainly extend to those outside of top echelons of athletics.

Wertheim and Sommers explore over twenty topics in all. Each chapter sets the stage by briefly explaining the seemingly bizarre element of sports and then proceeds to share the conclusions of several relevant studies. Sometimes they can leverage actual studies on sports, such as a statistical analysis of NFL coaching longevity and some original research about the attractiveness of NFL quarterbacks, and other times they cite other psychological studies and hope that the external validity at least extends to sports (and in most cases it probably does). These studies don't always have the soundest methodologies (and to their credit the authors often point that out) and this was never intended for publication in any academic journal. This is merely attempting to amuse the reader with some interesting takeaways and thought food and understanding of things like the halo effect rather than completely upend their notions of human behavior with a new foundation for how to look at psychology, which is why the book has a light tone throughout and covers some inane (yet often fascinating) topics like the aforementioned look at quarterback attractiveness.

The book strikes an optimal balance when it comes to scientific explanations. The intended audience is clearly sports fans with some interest in the social sciences (the inverse will still likely get something out of the book, though it will tread some familiar territory), so there is mercifully little arcane, inside baseball, academic talk about inhibited neurotransmitters and the underlying mechanics of the occipital lobe. There were a few sections that were unsurprising or rehashed material I had already read in other books or studied in college, but no chapters overstayed their welcome and I knew there would likely be a more interesting chapter coming soon (and there most always was). You might not learn as much about psychology as you would in a textbook (well actually you definitely wouldn't that's a remarkably unfair comparison), but This is Your Brain on Sports does offer a solid introduction to these topics that can spur further exploration in the sea of pop psychology books that followed in Freakonomics' wake.

Overall, This is Your Brain on Sports is a very enjoyable read and would go down as one of my favorite books in 2015 if it wasn't being released in February 2016. If you want to learn more about what psychology can tell us about the often wacky world of athletes (and also some trivial tidbits like the story of how journeyman quarterback Elvis Grbac (for all you youngins all you need to know is he's not exactly Casanova) was once named to People Magazine's Sexiest Men list) and enjoy pop psychology books and have at least a passing interest in sports, there is a lot to get out of This is Your Brain on Sports.