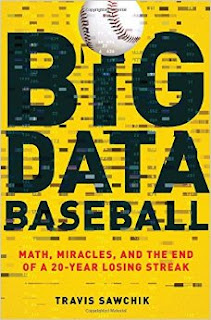 
I haven't followed Major League Baseball closely over the last few seasons, but I've been fascinated by the statistical applications to the sport since I read Moneyball about ten years ago. I picked up Travis Sawchik's recent book Big Data Baseball hoping to better understand some more current avenues of baseball research and an idea of what today's MLB analytics departments look like. Thankfully, Big Data Baseball largely delivers, exploring the quantitative insights underpinning the Pittsburgh Pirates' team-building and strategic principles that helped the team snap a losing streak that was rapidly approaching legal drinking age.

Big Data Baseball is organized around the Pirates' aforementioned 2013 season, which saw the Pirates reach the playoffs for the first time in 20 years. This was a surprising result, as the Pirates kept most of their key players and coaches from their disappointing 2012 campaign. While Moneyball and Jonah Keri's The Extra 2% were largely concerned with the best way to draft players and assess talent, the Pirates and their meager budget were forced to put a greater emphasis on how to get the most out of their current roster. This predicament required them to comb through seas of game data through richly detailed sources such as PITCHf/x pitch tracking to identify areas they could exploit to their benefit. Chief among these were frequent and dramatic infield shifts and having pitchers adopt a low pitch count strategy with a heavy diet of sinking fastballs. The Pirates also paid a great deal of attention to pitch-framing, seeing that catchers could cause dramatic swings in wins through their mitt placement, which led them to doggedly pursue catcher Russell Martin despite his anemic hitting performance the previous year.

The book proceeds in a generally chronological fashion and covers the entire 2013 season. Each chapter covers one rough theme, whether it is the value of pitchers inducing ground balls or the impact of pitch-framing, along with a look at how the Pirates and their statistics-based approaches were faring on the diamond. Sawchik presents surface-level analysis of these quantitative conclusions, often using a graph or table and spitting out a few relevant metrics. The focus is always on the conclusions rather than specifics as to how the data was crunched. Everything is explained in a cogent fashion that doesn't require a math degree to understand, though I wish Sawchik went a little more in-depth when explaining some topics.

While Pirates data wonks Dan Fox and Mike Fitzgerald earn a hefty amount of (much-deserved) credit and ink from Sawchik for their efforts, Big Data Baseball cites a handful of other heroes. Manager Clint Hurdle was instrumental in getting his team and organization at large to buy into some seemingly counter-intuitive strategies such as the Brobdingnagian infield shifts, General Manager Neal Huntington kept his faith in Hurdle and also assembled the Pirates' Baseball Informatics department, and players such as the unexpected star pitcher Charlie Morton and pitch-framing extraordinary Russell Martin were vital to executing on the field. Sawchik gives in-depth profiles of these actors as well as a handful of others and they help flesh the book out and make the reader care more about the 2013 Pirates' fortunes. No one is as engaging as Billy Beane (that's admittedly a rather high standard) but there was some personality to the 2013 Pirates.

Sawchik covers the Pirates for the local paper The Pittsburgh Tribune-Review and Big Data Baseball features the usual benefits and drawbacks of a book by a reporter. The big positives are that Sawchik had considerable levels of access to the team throughout the entire season, allowing him to draw from in-depth interviews from all major actors and a huge base of knowledge around the team. Learning about how Clint Hurdle became fascinated by analytics from his stint as an MLB Network talking head and Russell Martin's catching techniques were some of the highlights of Big Data Baseball for me. The downsides concern the prose, which is littered with some cliched metaphors and sometimes gets a little too homer-y for me. Still, it's a light and entertaining read with a decent amount of insight. The book doesn't seem to be geared towards die-hard statheads (Sawchick even explains what "the count" is at one point) but if you're interested in baseball analytics (but not too interested to the extent that all of this might be old hat for you), Big Data Baseball is worth reading. Despite my few nits, I thoroughly enjoyed it and if you too fall into that intended reader sweet spot (I-liked-Moneyball-and-think-quantitative-analysis-applied-to-baseball-is-interesting-but-I-don't-currently-follow-it-to-an-incredible-extent) you'll probably like it too.