Book Review: The Wisest One in the Room by Thomas Gilovich and Lee Ross 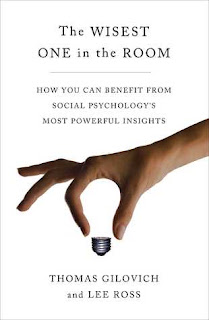 I normally really enjoy books like this, but I approached The Wisest One in the Room with more trepidation than usual. This was due to two specific words/phrases in the book's pesky subtitle (How You Can Benefit from Social Psychology's Most Powerful Insights): "How" and "Social Psychology." I'm not claiming that I'm often or even ever the wisest member of a room, I just dislike "how-to" books as they tend to have unappetizing content-to-fluff ratios and make for tedious reading. And while I find social psychology riveting, I worried that tackling such a broad subject would lead to a lot of overlap with other pop psychology books I had already read. Thankfully, both of these concerns turn out to be misguided for the most part. The Wisest One in the Room does tread over some similar topics to books like Predictably Irrational and Thinking, Fast and Slow but it also showcases some fascinating research conducted by its two authors and offers practical applications for such findings without ever remotely veering into self-help territory.
The book is organized into two parts. The first tackles the mental areas that make people "wise." These "pillars of wisdom" essentially concern understanding and acknowledging some of the foibles and quirks of human psychology, such as the fundamental attribution error and cognitive dissonance. Gilovich and Ross tend to stick to the usual pop psychology template of an introductory anecdote, a description of how the actual principle works, and then a synopsis of some relevant research studies and how they further illustrate said principle. This setup is executed well, and the authors are able to present enough examples of studies to ensure reader comprehension without ever feeling overwhelming.

These chapters do illustrate my biggest problem with the book, however, which is that the wide-ranging subject matter leads to some overlap with other popular books in the genre. Passages on the power of default choices (covered extensively in Richard Thaler and Cass Sunstein's best-selling book Nudge) and Daniel Kahneman and Amos Tversky's groundbreaking research on heuristics and how humans are remarkably poor at making reasonable decisions (described in-depth in Kahneman's Thinking, Fast and Slow which went similarly gangbusters (at least for pop psychology books) in terms of sales) explain important subjects vital to understanding human behavior, but they don't add much to anyone who has read those aforementioned parenthetically-cited books. Readers who are less familiar with the genre will get a lot more out of The Wisest One in the Room's initial chapters, though, and the authors need to cover such topics in order to properly set up the second half of the book.  Additionally, for all my carping, I was pleasantly surprised by the amount of new material I picked up in the first half of the book, such as a fascinating study on how researchers were able to influence whether Israeli respondents found Sri Lanka and Nepal more or less similar to East Germany and West Germany merely by switching the question's focus from "more dissimilar" to "more similar." Fear not if you found my description of that study confusing. Gilovich and Ross are much better at writing about these things than I am and do a phenomenal job of describing studies, especially how researchers designed them to keep confounding variables in check.
The Wisest One in the Room really hits its stride in that second half, where the authors apply the learnings from the first section to major public policy and quality-of-life issues. The strongest chapters are on maximizing personal happiness and achieving effective conflict resolution. Unsurprisingly, these fall into the authors' wheelhouses (both are psychology professors: Gilovich at Cornell and Ross at Stanford, and the two have over 80 combined years in the field). Gilovich has done a variety of studies on the former topic, and he offers some practical and enlightening advice to improving personal satisfaction with life and making the most out of experiences, such as how short, very fun vacations provide more long-term contentment than longer but slightly less fun experiences. Ross is the co-founder of the Stanford Center on Conflict and Negotiations and has worked with the UN and leverages this expertise for a compelling chapter on what his research and expertise tells us about resolving conflicts between the most stubborn of parties. There are no workshops at the end of these chapters or any magic bullets or "5 Simple Hacks To Make You The Happiest Person Ever" lists (Social Psychologists Hate Him!) like in actual self-help books/clickbait. Rather, the authors understand life is complicated and instead humbly proffer some general advice, backed up by some fascinating studies, to help readers better understand a few major topics. While other chapters on improving at-risk schools and contending with global warming are slightly less absorbing, they still present some novel ideas and make for quality reading.

I'm pleased to say that The Wisest One in the Room considerably exceed my expectations by showcasing a handful of engrossing and obscure research findings and applying social psychology to a variety of broader societal problems. Some other pop psychology books have certainly touched upon how research insights can inform governments and citizens, but often not to such an extent, and rarely on the topics of personal happiness and negotiations. It's these unique features that make The Wisest One in the Room worthwhile reading for any pop psychology book fan.