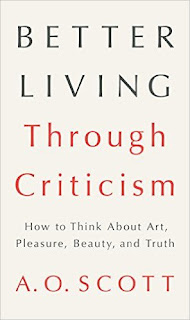 Critics have it rough right now. Those at major old media institutions are seeing their employers scrambling for revenue, aggregators are diluting their individual influence, and artists of all mediums continue to skewer them, especially when they get lambasted by the critical establishment. As a blogger with a Lilliputian viewer count (especially when you take away the Russian referral spambots) who generally just doesn't review books I dislike, I'm largely shielded from/oblivious to such problems. That said, I'm still interested in A.O. Scott's Better Living Through Criticism, which details what "criticism" actually means and the purpose and societal value of such a thing.

Scott is currently the chief film critic at The New York Times and one of the most-respected and blurbed critics in film today. His book covers major topics of criticism: is there an objective standard for quality or is enjoyment subjective to individual preferences, what makes someone a "good" critic, should everything be subject to intellectual incrustation, and so on. Scott examines all of these with an abundance of support from essays, works, and thought experiments. It should be noted that Better Living Through Criticism is concerned with criticism as a whole, not film criticism specifically. Scott has a literature degree from Harvard and started out at The New York Review of Books practicing the honorable craft of book reviewing. He's clearly a very well-read guy. Besides drawing examples from Ratatouille in his concluding chapter, Scott's sources rely less on Pauline Kael and her ilk and more on thinkers such as Kant and Aristophanes. Many of his cultural examples are from plays, poems, and literature. There are of course a few mentions of films and an interesting fictional dialogue (one of several throughout the book) of what initially got Scott interested in film criticism specifically) but this is by no means a book about film criticism specifically. If you're only interested in learning what it's like to review movies and Scott's criteria for what makes a good movie and so on you will not really find that here.

I found Scott's strongest argument on the role and value of the critic to be the critic serving as a guide to what works are worth a busy person's time. When I was younger I had tons of time but non-tons of money, and as an adult these factors have been (relatively) reversed. In both cases, professional reviewers ranging from Electronic Gaming Monthly as a kid to The Quietus (and yes, Pitchfork too) as an adult were vital to identifying what cultural works I might like to consume with my allowance/hard-earned money. The best reviewers are able to articulate what makes a book/album/movie/video game etc. unique, what the consumer can expect, and the quality of such works, and Scott additionally notes how some of his favorite reviews imbued the reader with a vicarious sense of actually experiencing the content through prose. Critics never/rarely serve as the be-all and end-all to such decisions, but I consult them on a regular basis to see whether they can turn me onto some new media I'll probably like, and given the fact that sites like Rotten Tomatoes draw tons of traffic and Pitchfork effectively launched bands like the Arcade Fire through laudatory reviews I'm not alone in this sentiment. That is the same function I'm trying to serve on this ad-less blog (not driving tons of sales for authors or web traffic but that whole "I'm going to read a ton of books so you don't have to/because my subway commute is terribly long and let you know about the really good ones and some stuff I don't like as much").

Getting back to that aforementioned function on the non-ad-supported blog, Better Living Through Criticism is a heady read and will likely appear in quite a few college syllabuses in the future. This is both a testament to the fact that the book is thoughtful and well-articulated and also that it's a a pretty heady tome. The book is not an easy read, and I had some flashbacks to college lit classes and there were some parts that I struggled with. However, if you are a huge fan of dense and deep discussions on the nature of criticism and have a huge pre-existing knowledge of and interest in art of all kinds then there is a lot to like in Better Living Through Criticism. It's well-written and smartly constructed that will likely leave you with more respect for critics (thanks A.O.).