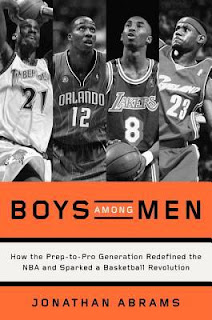 This April will mark the 10th anniversary of when the NBA set their current age limit of 19, effectively banning the practice of players jumping directly from high school to the pros. Unless Gerald Green has a late-career renaissance or something we all have a decent idea of how these prep-to-pro players have generally panned out in the pros. The route has yielded some major hits (Moses Malone, Kobe Bryant, Lebron James) and misses (Lenny Cooke, Taj McDavid), though a 2004 study conducted by Michael A. McCann of Harvard Law School found that such players enjoyed longer careers and larger contracts than their (at least semi-)college educated counterparts. While we can debate about whether this age-limitless-era was good or bad for basketball and the players that took advantage, these players undoubtedly had a huge impact on the game. In Boys Among Men, Grantland alumnus Jonathan Abrams chronicles the history of the prep-to-pro movement, from trailblazer Moses Malone in 1974 to Amir Johnson, the final high schooler selected in the 2005 Draft. Abrams' accounts of the players that took the plunge and how they influenced and were influenced by the evolution of the business and strategy of the sport make for remarkably compelling reading.

Abrams mentions in the acknowledgements that his interest in the subject was peaked while working the Los Angeles Clippers beat right out of college. He was curious as to how these young players four years his junior handled playing in the NBA and handling the pressure and business of the sport (especially given that financial hardship is often one of the biggest reasons for high schoolers forgoing college). This curiosity frames his approach to Boys Among Men. While Abrams clearly possesses encyclopedic knowledge of the game and is adept at describing on-court happenings (his account of a matchup between cautionary tale Lenny Cooke and Lebron James at an all-star camp for prep stars is one of many such examples), the focus is more on how the players handled themselves off the court. What made them consider and eventually opt to skip college, how did they handle the pressure of performing for scouts in pre-draft workout sessions, and how did they acclimate to the NBA and what hurdles did they encounter? Agents such as Arn Tellem and apparel marketing executives such as Sonny Vaccaro also feature prominently, as they were instrumental in raising salaries to stratospheric levels and making it more appealing for players to declare early. The book also traces some of the developments that helped lead to the age limit, such as the Malice in the Palace brouhaha that severely harmed the league's image.

Abrams devotes most of his book to the second wave of prep-to-pro in the mid-90s (there was a 20 year gap between Bill Willoughby taking the plunge in 1975 and Kevin Garnett in 1995), especially Kevin Garnett, Jermaine O'Neal, and Tracy McGrady. The less successful flameouts such as Korleone Young and Taj McDavid receive almost equal coverage, and learning about what went wrong almost makes for better reading. After proceeding chronologically through the high-school-to-pro era, Abrams concludes with analysis on how the pro and college game has adapted to the age limit, including a look at John Calipari's efforts to build a one-and-done assembly line at the University of Kentucky.

43 players have jumped directly to the NBA from high school. In the wrong hands, an authoritative account of the prep-to-pro era would turn monotonous well before the reader got to Lebron James and Dwight Howard. However, Boys Among Men benefits greatly from Abrams' abilities as a writer and exhaustive research and interviews and the fact that some very colorful and varied characters involved in the story of the movement. From the laconic Moses Malone contending with recruiters such as an Oral Roberts coach that promised committing to the evangelist-founded school would heal his mother's tumors to the charismatic Kobe Bryant to the boisterous Lenny Cooke, the only common thread between high school draft prospects is their roundball skills. This diversity helps keep things from getting stale as there is no typical archetype for such players. Similarly, there is no typical "high-school-to-pro-rookie" experience, as while some players benefited from "Team Moms" and substantial support networks others were largely left to fend for themselves. Additionally, Boys Among Men is remarkably well-crafted and will undoubtedly be one of the best-written sports books of 2016. Abrams wrote the book over four years and this effort is evident on every page. he draws from numerous interviews with primary actors such as Tracey McGrady, Jermaine O'Neal, and even former NBA commissioner David Stern. This means there is plenty of new insight for even die-hard basketball fans, and the book is greatly enriched by insider tidbits such as how ridiculously close the Nets came to selected Kobe in 1996 and the actors that eventually quashed the pick (and as a result the Nets' success for the next few years) and quotes from Kevin Garnett's high school teachers about his diligence and personality.

Boys Among Men will likely go down as my favorite sports book of 2016. It's well-written, objective (Abrams acknowledges that the lack of an age limit had a complicated impact with pros and cons, this is not a hatchet job or rhapsody to the halcyon days of prep-to-pro draftees), and never drags despite its decent length. There is definitely enough original analysis and insights to appeal to even the biggest basketball fans, but anyone remotely curious about the the sport or the business around it will greatly enjoy Boys Among Men. Because at its core it's the stories of a bunch of wildly different players brave enough to take the leap from high school to the pros, and whether it's Kwame Brown trying to take his whole family out of poverty or the tragic story of Lenny Cooke or Kobe Bryant's 5 am shooting sessions and 100 point half-court games, these stories make for excellent reading.