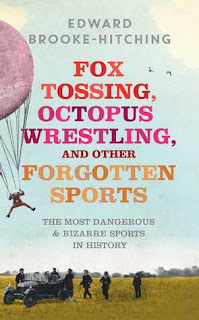 Amazon / Goodreads
When reading through books I plan on reviewing, I often jot down a few tidbits that I find interesting enough to at least consider mentioning in the final review. And I started this practice with Edward Brooke-Hitching's Fox Tossing but quickly abandoned it after tiring out my wrists barely twenty pages in. There was at least one duel conducted in hot air balloons? Aerial golf, featuring one player dropping golf balls out of an airplane for his golfing teammate on the ground to sink, was not only once a thing, but played by the likes of Ty Cobb and former New York City mayor Fiorello La Guardia? A tour through odd sports that have been long-forgotten by contemporary society, Fox Tossing is well-written and packed with fascinating trivia that will keep any margin jotter quite occupied. Unfortunately, it is also essentially a well-written and fascinating-trivia-packed alphabetical list of items, and this format gets a little monotonous after a while.

The book was spurred by Brooke-Hitching stumbling upon an article on fox tossing (which is basically what you think it is, for all their ridiculousness, some of these sports are rather sensibly named) while he was conducting other research. This discovery led the author stumbling further down the rabbit hole of preposterous pastimes as he searched for more absurd games of yore. Fox Tossing is the result of his findings, with Brooke-Hitching offering brief descriptions of some of his best finds. Each entry goes for about 3-4 pages and there are a good amount of pictures and diagrams, which can be remarkably helpful as some of these sports are so illogical that they are effectively incapable of being described with the written word. There is no greater thematic organization or more macro sections on larger trends or the evolution of sports through the years; Fox Tossing reads like a superlong version of a drier and wittier Cracked article on "The 100 Dumbest Sports Time Forgot."

As Brooke-Hitching explains in his introduction, there are three factors that caused these sports to go extinct: "cruelty, danger, and ridiculousness." Some pastimes, such as octopus wrestling and donkey boxing even managed the entire trifecta. There are some mentions of freakish mutations of major sports like Stoolball and Baby Boxing, but the majority of Fox Tossing's selections concern the mean and/or strange things humans used to do to animals, including tortoise racing and a ton of ways to incite anger and occasionally injury to bears and foxes. These are absorbing themes to be sure, but the repetition will likely wear on readers. Still, Brooke-Hitching is a more than capable guide through these inane sports. He's clearly done his homework, leaving no strange sporting stone unturned and trawling through Florentine manuscripts from the 1300s and the 1794 edition of The Kentish Gazette for his information.

Despite being packed with some absolutely stellar factoids about ridiculous oldentime behavior, Fox Tossing did begin to lose steam for me about two-thirds of the way in. It's not that tortoise racing or ski ballet were any less interesting than auto polo or bow and arrow golf, but simply because the list structure format wore a little thin as things got more repetitive. The content would probably best be served as a longform magazine article where Brooke-Hitching can cherry pick the most intriguing sports and group things thematically with a bit more broader reflections on such sports. I still enjoyed myself and am glad I read Fox Tossing, but I wish the content was organized differently.