Advance Book Review: The End of Karma by Somini Sengupta 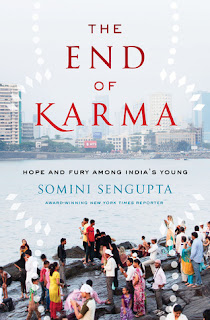 
It's almost hard to believe now, but only several years ago India and China were deemed equally likely to be the economic "it" country that would be crucial to driving future global growth. India saw nearly double-digit growth in the mid-2000's and was even projected to see faster economic growth than China beginning in 2020. Today, India has largely taken a backseat to China, with the latter being seen as the global economic force and getting its own standalone section in The Economist. India is still likely to be a major player in the future, as the country has over 300 million citizens under 15 years old is set to pass the graying China as the world's most populous country around 2022. In The End of Karma, journalist Somini Sengupta chronicles how India's massive youth population is transforming the country and shaping its future through a handful of representative stories. The book is equally parts engrossing and illuminating and will leave the reader with a firm understanding of India and its future.

Sengupta's central thesis is that the gradual dismantling of India's state run economy in 1991 helped India's youth break free from the country's past and determine a new future for themselves. Caste and social standing no longer circumscribe Indians to a small geographic and occupational niche, as people can rise from a poverty-stricken caste to engineer in Bangalore or Silicon Valley. Sengupta illustrates her points through seven profiles of Indians from a variety of different social standings and Indian states. There is Anumpam and Verish using education to escape from their lower-caste upbringings, Varsha, a young woman from a caste of cleaners who is aspiring to be a cop in a country that can be dangerous for women, and Rahki who associates with Maoist rebels despite growing up in a decently prosperous household.The common thread between all of these stories are that the subjects are shaping their own destinies, a decently novel concept in a culture that has largely been bound by tradition in the past.

The End of Karma reads like 7 New York Times Magazine articles. While each story stands alone fine on its own, Sengupta will occasionally note similarities between her profiles and how they showcase similar themes. Sengupta covers the United Nations for paper and previously served as its New Dehli bureau chief. She writes with an eye for vivid details and helps bring settings ranging from the slums of Bihar to the gleaming luxury skyscrapers of Gurgaon alive to the reader. She also frequently points out how these individual stories showcase broader macro trends across the entire country and while the personal stories stand very well by themselves (I frequently found myself emotionally invested in the characters and rooted heavily them to succeed), the broader insights help leave the reader with a strong understanding of the major trends currently impacting the country, such as the sorry state of education, rise of Narendra Modi, and spate of urban violence against young women.

Overall, The End of Karma is a compelling read to anyone curious about India. It is well-written and insightful and serves as an excellent primer to the issues that will shape India's future. Sengupta seems to be aiming for a foreigner audience and some of her material may already be familiar to native Indians or those who have closely been following the country for the past decade or so, but if you fall outside of that camp there should be a lot to learn and enjoy from The End of Karma.