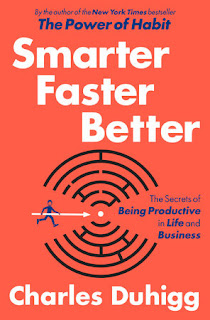 Charles Duhigg's first book, The Power of Habit is actually a huge reason why I currently work in marketing (way to go, Chuck). I had always had some interest in the field, but a 2012 excerpt from his first book in the New York Times Magazine about Target's troves of consumer data basically sealed the deal for me. Duhigg presented a fascinating account of how the retailer was able to identify that a teenager was pregnant before her own parents. I read it in the spring of my senior year of college and I yammered on incessantly about it in all of my job interviews.

Despite its considerable (and monetarily-damaging) impact on my vocational choices, I was actually slightly underwhelmed when the proper book came out several months later. The Target section was by far the highlight for me and the rest of the book followed the same general structure of long accounts about the generic subject of habits with some passages that went dangerously close to self-help territory. It was a decent read, but it didn't really meet my admittedly lofty expectations.

Duhigg's new book, Smarter Faster Better explores of the topic of productivity with the same "chapters of long interweaving stories that don't completely form a cohesive whole" template that he employed with The Power of Habit. Borne out of a phone call with the absurdly accomplished surgeon-bestselling author-researcher Atul Gawande about how certain people can accomplish so many things in a day, Duhigg attempts to understand how productivity works and why some people and companies are so much better at it that others. He ends up drawing from everything from poker star Annie Duke to catastrophic airline crashes to the cutting-edge of cognitive science research.

The stories Duhigg draws from are pleasant enough but a few drag on too long. Sometimes they get caught up in minutiae like a rather dull play-by-play of a World Series of Poker final. Others are a bit more engaging but don't feel like they contribute much to Duhigg's major points. The book has a disjointed feel in general and occasionally feels like a collection of disparate magazine articles.

Most of Duhigg's observations don't break much new ground. One of the reasons why I was so captivated by the Target article was because this was something I had never known about before and was largely new territory for mainstream pop social science writing. Smarter Faster Better probably won't really alter your world view in a similar fashion if you've been reasonably current with major findings and books in the field. Basically, motivation is good, having a sense of being in control helps, and setting realistic goals makes a difference as well.

While this review might come off as a bit harsh, I definitely enjoyed parts of the book. If you liked The Power of Habit I see no reason why you wouldn't get just as much out of Smarter Faster Better. My biggest issue is that the only thing I got out of the book is a few random interesting tidbits and amusing stories. So if you want a few hours of stories along with a smattering of references to relevant academic studies, you can give Smarter Better Faster a read. It's decently entertaining but just bear in mind it doesn't completely succeed with its goal of providing deep and novel insights on productivity.