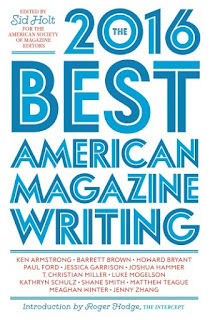 If you're the kind of person who demonstrates an iota of interest in The Best American Magazine Writing 2016, this year has probably been a bit rough for you. A lot of famous people you probably liked died, a sovereignty left an occasionally bumbling but ultimately good-intentioned continental trading bloc that you want to stay together, and the American presidential election likely didn't turn out the way you preferred. I'd definitely understand if you wanted nothing more to do with the seventeenth year of the second millennium and any magazine articles written during the period. Thankfully, the series adheres to the "we're just going to inflate the year by 1" Madden-style naming system that confuses grandmas everywhere and these pieces were all published in the relatively halcyon days of 2015. Despite this, the collection tackles some heady and depressing subjects. There are articles about rape, ebola, immigrants getting treated like garbage, devastating earthquakes, and the book can feel unceasingly bleak when it strings together a series of these in a row. Now these are all important topics worthy of plenty of ink and attention, but I feel like they could have been ordered in a way that was a little less wrenching for the reader in the book, and some didn't really seem to do much to advance the discourse on their issues. As is generally the case with these collections, there are a few strong essays surrounded by less captivating fare, but ultimately the standout essays are just enough to justify the price of admission.

The book compiles the best magazine articles written in 2015 as decided by the American Society of Magazine Editors. It is organized by category and includes the top single-topic, feature, and reporting articles as well as the best essays and commentaries. This structure can make the feature and reporting section a bit of an emotionally-draining slog and it would have been nice to intersperse some of the other articles with a smidgen more levity in between them. The major highlight for me were Kathryn Schulz's The Really Big One from The New Yorker which lucidly explains the prospect of an absolutely devastating earthquake hitting the western United States and is a shining example of describing distilling complex scientific and geological concepts into digestible prose that even a harebrained book-reviewing MBA student can understand. I also absolutely loved Barrett Brown's correspondences from prison for The Intercept. Brown is apparently a government transparency rabble-rouser who is down with Wikileaks and was sentenced to 5 years in prison for threatening an FBI officer and some other offenses associated with an FBI investigation into an email leak. The articles riff on a wide variety of topics, from reviewing Jonathan Franzen's Purity to proudly retelling instances of him raising rabble in prison. Brown is wickedly clever and writes with absurd levels of snark and contempt for his current position, while also fully aware of how ridiculous it is that he is surrounded by hardened criminals praying in jury-rigged shrines so that they could be blessed with being served potato wedges for lunch rather than potato chips. I could see some readers finding Brown to be grating, but I really enjoyed the 3 articles by him included in the book. Finding out about articles like these are why I always try to pick up these volumes each year.

There were a few articles that didn't really capture my interest at all and seemed to drag on for a while. Most notable was Paul Ford's What is Code, which did a decent job at arguing why code is important but a far worse at being entertaining and readable. A few of the other articles, such as Meaghan Winter's reporting on abortion clinics touched upon important subjects but didn't convey much new information to anyone reasonably knowledgeable on the topic. Still, the overall reading experience was pleasant and I give the selection panel credit for culling from so many different sources, from Cosmopolitan and Vice to The New Yorker and New York Times Magazine. I recommend you pick this up if you've enjoyed the past volumes or are just a fan of longform journalism in general.