Advance Book Review: One Nation Under Baseball by John Florio and Ouisie Shapiro 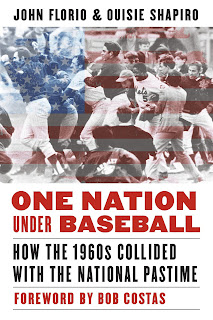 Sports are seen by many people as escape from the real-world and any social and political issues that might exist therein. And while a day at the ballpark can be an immersive experience, the game is shaped by (and occasionally shapes) societal forces. Perhaps no decade demonstrates the particular connection between baseball and American history better than the 1960's, which was a transformational time for both sectors. In One Nation Under Baseball, John Florio and Ouisie Shapiro present a readable and insightful look at this intersection.

The notion that "sports are divorced from politics" is a bit unbelievable in this day and age (and the same largely held true 60 years ago). Rather than beat down on this strawman, Florio and Shapiro chronicle the political and cultural forces that shaped baseball during the 60's, taking the connection as a given and looking instead at how these forces impacted the game. One Nation Under Baseball touches on the major subjects of the period, including integration and civil rights, the elimination of the reserve clause and embiggening of the player's union, and the Vietnam War and the rise of the counter-culture. Each movement is placed in its proper historical context, though sometimes I felt the authors went into too much detail describing some basic information about events such as the March on Washington and suburbanization of America. The reader is likely already pretty familiar with those events and the authors didn't tread upon any new territory. The book does shine in linking baseball to these shifts, such as Hank Aaron's account of listening to restaurant workers smashing the dinnerware he just had eaten on because none of the restaurant's patrons wanted to eat off the plate of a black person.

The book reads like a documentary film (which isn't surprising given that co-author Shapiro has worked on a handful of them), frequently relying on extended passages of quotes from interviews as well as primary source materials. Everything on baseball is well-researched and the book is greatly enriched by drawing from these sources.

One Nation Under Baseball especially shines when discussing the evolution of baseball media. The 1960's marked a transitional time for newspaper writers. Impacted tremendously by the rise of television and an extended newspaper strike in New York, a new generation of writers called  "chipmunks" realized that they needed to shift their approach. Now that fans could figure out who won through watching the news, these new scribes (including George Vecsey of The New York Times and Larry Merchant of The Philadelphia Daily News) focused instead on more long-form articles that provided details on the players' personalities and offered deeper analysis. Also benefiting from primarily writing for afternoon papers with later deadlines, these writers really leveraged their access to players and managers and presented a unique perspective that other mediums couldn't match at the time. The decade also saw the first real efforts of some players to pull back the curtain of big-league life and expose the life of a player, warts and all (but especially the warts) to the general public. This reached a fever pitch(er) with the publication of Jim Bouton's diary of his 1969 season, Ball Four, with its tales of beaver-hunting, drinking, and other sordid affairs (at least to his early-70's audience that hadn't yet been desensitized to athletic indiscretions through exposure to countless incriminating athletic Instagram selfies). The old-guard sportswriters of Dick Young and Jimmy Cannon adhered to a code that generally protected players from such scrutiny, and the 1960's marked the start of a movement of player exposure that would only get more and more intimate (see previous parenthetical statement about incriminating Instagram selfies) as time went on.

Overall, One Nation Under Baseball was a quality read that is worth seeking out for anyone fitting into the Venn diagram intersection of being interested in baseball and history. This is the second baseball-related book I've read from University of Nebraska Press this year and both were considerably entertaining and light reads. Definitely seek this out if the premise sounds intriguing to you.