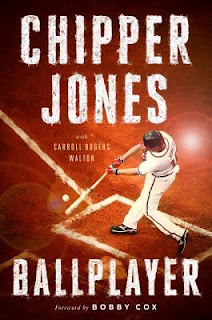 
Ballplayer, Chipper Jones' somewhat-generic entry in the "star athlete memoir" genre, will probably entertain Braves and/or Jones fans but doesn't offer a ton for the casual baseball fan who never performed a Tomahawk Chop. Jones had a long and illustrious career with its fair share of ups and downs, but Ballplayer is hurt by shallow writing and many tired athlete memoir tropes. It has a few positive moments and is overall an average read, but it's hard to strongly recommend the book to the general fan.

The book follows the tried-and-true player memoir format. Jones recounts his early years growing up as the son of a baseball coach in rural Florida and describes some impactful moments from his childhood. We learn that his switch-hitting was encouraged by his Mickey Mantle-idolizing father and how his regret about leaving his local high school for a snootier prep powerhouse in Jacksonville contributed to him staying with the Braves for his entire professional career. The bulk of the book concerns his tenure with the Braves, and gives a chronological overview of his professional career and his experiences on the field and in the clubhouse. Jones offers insight into the personalities of Greg Maddux, Tom Glavine, Bobby Cox, and other Braves staff and also shares some run-ins with other players such as Barry Bonds (unsurprisingly a bit of a jerk to Jones). The broad synopses of each season drag a little bit as many of them blend together but there are a few amusing anecdotes, such as how Jones decided to go deer hunting on the day of his first-ever World Series game. The reader will also pick up some useful nuggets of baseball wisdom along the way, which is probably the best aspect of the book. Jones was a true student of the game (his future certainly lies in some kind of coaching or analyst role assuming he still wants to work) and he also has an astounding memory of his playing history. He shares tidbits such as how the major benefit of becoming a switch-hitter is preventing sliders going away from the batter and that hard-throwing pitchers with better "stuff" outperform more control-based hurlers in colder weather because batters are less warmed-up.

Ballplayer's biggest drawbacks center on Jones' limited writing abilities. On the prose front, Jones isn't particularly strong at describing things and my Kindle counted 6 separate instances of the phrase "shit-eating grin" (and I'm not entirely convinced it captured all of them). Jones simply isn't all that great at articulating his feelings and the writing in general often came off as clunky. Even when dealing with his off-field troubles (Jones got divorced twice and had an affair with a Hooters waitress in 1997 that resulted in a son) Jones' writing reads like a public apology statement. I'm not going to play armchair psychologist and try to understand whether he's truly remorseful or not, but I will play armchair book reviewer and say that these passages weren't interesting or insightful.

In recent years Jones has had some incendiary and foolish tweets, including suggesting the Sandy Hook school shootings were a conspiracy, making tasteless jokes about illegal immigrants, and challenging an army veteran who was angry about being snubbed for an autograph over 15 years ago to a fistfight in an extended and inane stream of threats and insults. That said, his tone isn't absurdly arrogant over the course of Ballplayer and his personality didn't bother me. Jones' peak performance coincided with my formative years and it was nice to relive some of the biggest moments of 90's baseball and read about some of the game's stars during the period, and I appreciated the times Jones shared some of his substantial wisdom about the game. Still, Ballplayer is a typical player memoir, and suffers from the same problems that plague most offerings in the genre. Braves fans will like it, but for the general fan it's just an average read.