Book Review: How to Watch Football by Ruud Gullit 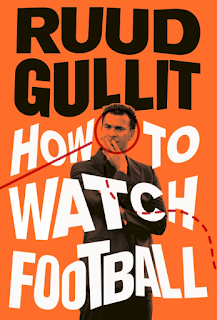 Some aspects of soccer, such as a brilliant run by Leo Messi or one of Zlatan Ibrahimovic's ridiculous karate-kick goals, are intrinsically delightful and do not require any knowledge about the sport to enjoy. Others, like Portugal's stultifying style of play during the 2016 Euros, are intolerable to even the most ardent and sophisticated soccer fans. Most of the time, however, soccer operates between these two extremes, and like virtually every entertainment medium, a greater understanding of the nuances of the sport makes for a more rewarding viewing experience. Ruud Gullit's How to Watch Football sees the legendary player and current pundit attempt to impart some of his wisdom about hte game to the curious fan. It's a decent, albeit slightly disorganized and cliche-ridden read, and does leave the reader with a better understanding of the sport.

The book is organized a bit haphazardly, beginning with a not-entirely-necessary autobiography/memoir of Gullit's early years and playing days. It is at least mildly interesting fare, and the reader gets a feel for Gullit's ego and opinionated nature, on everything from PSV Eindhoven's kit design to the Netherlands' tactics in international tournaments. Gullit transitions from his personal reflections to the meat of the book: offering a reasonably comprehensive analysis of the major elements of soccer. There are sizable passages on topics like the most popular formations and tactics, the role of each position, and the playing styles prevalent in each major soccer nation. Gullit draws heavily from his playing and coaching days (though perhaps unsurprisingly he basically ignores his rocky managerial tenure in the MLS with the Los Angeles Galaxy), sharing heaps of anecdotes. Most of the time these are illuminating and help further support his concepts and assertions, though he can get grating when he constantly rails on Jose Mourinho and how much tougher players were back in his day (and don't get Gullit started on the amount of time contemporary youth spend on their cellular phones).

How to Watch Football attempts to fill a niche that is surprisingly underserved, at least in the US market, of an intermediate-level soccer viewing guide. In terms of how advanced the content is, I'd put it somewhere between Soccer for Dummies and Jonathan Wilson's outstanding Inverting the Pyramid (which is solely devoted to formations and tactics). On the whole, I did pick up some nice random tidbits about the intricacies of the sport like position play and the evolution of the Dutch talent development system, though it's too uneven overall to recommend too highly for the average reader. You will probably gain some insight about the game though, and it's worth checking out if you want to better understand and appreciate the game.