Advance Book Review: Truth Doesn't Have a Side by Dr. Bennet Omalu with Mark Tabb 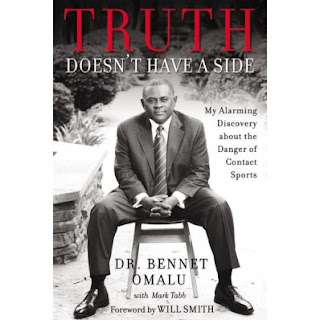 A 2016 poll conducted by Public Policy Polling found that only 19% of NFL fans had favorable opinions of Commissioner Roger Goodell. Less statistically-minded readers just need to tune into the NFL Draft when Goodell is met with a loud chorus of boos every time he steps on the stage, even when accompanied by the likes of NFL legends and sick children (though the booing fans are at least polite enough to make an effort to demonstrate that their sonic opprobrium is only intended for the commish). It wasn't always like this. Goodell was largely unknown among casual followers of the sport when he took the job in 2006 and there was a time where he could interact with fans without requiring the constant watch of a massive security team. There are a few factors behind Goodell's vilification, but perhaps the NFL's tremendously poor handling of the concussion issue is most responsible for his current unpopularity (at least outside of New England). Dr. Bennet Omalu, the forensic pathologist who made the initial link between football and chronic tramautic encephalopathy, has been one of Goodell's biggest bugbears as he paved the way for further research into the dangers of football. In Truth Doesn't Have a Side, Omalu recounts his experiences working to uncover the relationship between football and CTE and the frightening health consequences of the sport, as well as his unlikely path from war-torn Nigeria to the United States and the the impact and outcomes of his findings both within his field and his personal life. Omalu's story is a remarkable one, but the book largely follows the general paint-by-numbers celebrity memoir and lacks enough depth or introspection for me to strongly recommend it, though it's a decent read in general.

The first third of Truth Doesn't Have a Side cover Omalu's childhood and his winding route from an undernourished child in Nigeria to a doctor in America with a Will Smith movie based on his work.  Born in a refugee camp during the Nigerian Civil War, Omalu was born while his father recuperated from a bombing attack in the same hospital. Omalu's family lost all their savings in the conflict, but his parents were able to provide for him after the war and instill into Omalu the value of education. After earning his degree in Nigeria he was able to secure a fellowship at the University of Washington and eventually ended up as a forensic pathologist in Pittsburgh.

Omalu's interest in exploring the health impact of football after the death of former Steelers Center Mike Webster. Webster, a local favorite who was inducted into the Pro Football Hall of Fame in 1997, had struggled with depression and a host of other psychological issues that sprang up after his retirement from the game. Omalu had his own personal struggles with depression and sought to understand how Webster's personality had changed so dramatically, eventually leading him to discover the link between playing football and CTE. Since Webster had conclusively passed from a massive heart attack, Omalu's pursuit of probing deeper into Webster's health woes was completely a pet project that was done on his outside time, out of his desire to set the record straight on Webster. Omalu conducted further research and was able to link many other former football players to CTE, drawing the ire of the NFL. Truth Doesn't Have a Side describes the ramifications of going up against a sporting behemoth, including claims that he was trailed on several occasions and having his credentials and research challenged and contending with roadblocks on getting his results published. The NFL doesn't come out looking very good in this, but none of Omalu's claims in the book are particularly new. This highlights one of the biggest problems of the book for me: it's an interesting story and covers a huge topic with ridiculously important implications for the long-term health (literally and financially) of one of the biggest sports leagues in the world and a long-running institution, but the book itself doesn't cover much new ground. I wish Omalu went into more insider detail on his research and battles with the NFL rather than providing a surface-level summary and moving on to the next chapter in his life. There just simply isn't enough depth or new information given that his work has been chronicled before in magazines, books, and movies.

Truth Doesn't Have a Side is more of a memoir than an anti-football manifesto, but Omalu does make his opinions on the safety of the sport known. His medical advice seems completely sound (not that I'd ever be in a position to quibble with him on such matters) and his more philosophical and ethical arguments seem reasonable. Omalu contends that, due to a variety of factors including the fact that the brain is one of the few human organs incapable of healing itself, humans really shouldn't play football, and if they do they should wait until they are 18 and responsible enough to decide for themselves. Seems fair enough, and Omalu answers a plethora of questions about the safety of contact sports at the end of the book outlining the various risks and why he takes such positions. Still, it's a bit naive to think that this would ever fly in football-mad states like Texas, and assuming that some parents and kids are willing to skirt any restrictions, it would be quite difficult for any player to try to make a college team without any prior football experience given the technical nature of the game.

Overall, Truth Doesn't Have a Side is a pleasant and quick read and a worthwhile read for anyone interested in CTE research and/or who enjoyed the Concussion movie. It never really transcends the celebrity memoir genre though and is unfortunately a bit shallow. Outside of his childhood and his thoughts about how it felt to have a Will Smith movie based on his life (spoiler alert: he thinks it's pretty cool), Omalu doesn't bring much new insight into his research on CTE that hasn't been covered elsewhere.