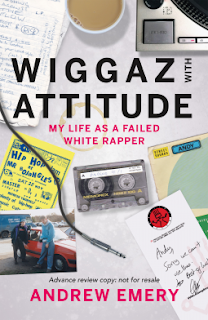 The basic premise of Andrew Emery's new memoir Wiggaz With Attitude isn't particularly earth-shattering. The author chronicles his experiences growing up as a white hip-hop fan in an ethnically vanilla region where his music preferences were met with confusion and occasionally derision from his peers. He also goes into considerable depth on his dabblings as a rapper during his teenage years, which, as the "My Life As a Failed White Rapper" subtitle might suggest, resulted in little more than a few random recordings and performances at sparsely-attended shows. While Emery occasionally lapses into self-indulgence when he deeply examines his old recordings that even he acknowledges often aren't particularly high-quality, his writing chops and clear passion and knowledge for all things hip-hop caused Wiggaz With Attitude to exceed my expectations and made for a quite entertaining read.

Emery grew up in 1980s England and following the music was a dramatically difficult endeavor during its early years. He writes of scrounging for whatever bits of hip-hop he could find on obscure radio stations, immediately befriending the few schoolmates who had an interest in the music, and poring through the pages of Hip-Hop Connection, a British monthly that actually predates The Source as the world's first hip-hop magazine. The music had a huge impact on his worldview and eventually inspired ambitions of rap stardom. Emery began to write rhymes in his early teens and performed in a few local groups. The bulk of Wiggaz with Attitude centers around Emery's limited rap career, detailing his music evolution (Emery cycled through several different hip-hop lyrical personas, including an especially amusing period as an uber-conscious, albeit somewhat hypocritical and misguided, rapper) and attempts at making it big while balancing music with making money and school.

Emery combines wistful nostalgia with reflective embarrassment and is an engaging guide through his rap career, teenage years, and hip-hop music in general from the 1980s through the early 90s. He brings an encyclopedic knowledge on the subject, getting way into the weeds on hip hop arcana and trivia such as the legendary 1981 battle between the Cold Crush Brothers and the Fantastic Romantic Five at Harlem World and his favorite songs about cars in the book's frequent footnotes. My personal highlights while reading Wiggaz were the passages where Emery riffs on random hip-hop minutia or goes off on topics like why live rap is often so underwhelming. He's also a gifted writer, perceptively noting that rappers will often request the crowd to make substantial amounts of noise, preferably of "the 'motherfucking' variety" and taking KRS-One (Knowledge Reigns Supreme Over Nearly Everybody) to task for never specifying the few individuals who are above knowledge over his thirty-plus years as a recording artist. Wiggaz also benefits from the fact that U.K. hip-hop fans are rather underrepresented in the genre's limited literary canon, and it was interesting for me to read about how the music was received and followed in the country.

At times Wiggaz felt like it dwelled too much on Emery's rap career. This isn't a book like Hot Karl's Kanye West Owes Me $300 where he seemed on the precipice of fame and just had a few bad bounces that doomed him to relative obscurity. Outside of a brief flash of interest from Gee Street Records (who released P.M. Dawn's eclectic and critically-acclaimed 1992 album Of the Heart, Of the Soul, of the Cross: The Utopian Experience), Emery's rap groups never came anywhere close to making it big, medium, or small. Which is totally fine, and doesn't detract from his reflections on what the genre meant to him as a white kid growing up in Leeds and small-town England or his sense of wonder at finally traveling to the hip-hop mecca of New York City. And Emery is self-effacing and is always willing for the reader to have a laugh at his teenage rapper self's expense when sharing some of his old lyrics. Still, the book would occasionally drag when Emery would analyze seemingly every song put out by his rap crews. I liked Emery's review of his forays into didactic and super-political hip-hop and his posse cut about drinking tea was clever but a lot of his other songs were kinda bland (a fact that Emery willingly points out) and grew tiresome to read through.

One frustrating aspect of Wiggaz is that there are times it feels like Emery is holding back on the reader. Early on there is a footnote about a time when he punched Woody Harrelson at a party without much further context, and I understand why he didn't elaborate much on that (though as he tells it the True Detective star was in the wrong) in what is ostensibly a memoir about growing up as a hip-hop head. I'm more referring to how the book's narrative arc basically ends after Emery graduates university and gives up his rapping career. This would have been fine and understandable if he became an accountant or something similarly un-hip-hop, but Emery instead worked at the aforementioned Hip-Hop Connection magazine, eventually becoming its contributing editor. He teases the reader by mentioning in passing activities like playing pool with the Beatnuts, a disastrous interview with Method Man, Prodigy falling asleep on him, and conducting a phone interview with Lauryn Hill while she was in the shower. I would have loved for him to have elaborated on at least some of these and share some of his other adventures in hip-hop journalism. We can at least take solace in the fact that this isn't Emery's only book (he previously penned The Book of Hip-Hop Cover Art and is currently working on a book about hip-hop memorabilia.

As part of doing due diligence and adequately performing my duty as a book blogger, I perused Emery's website and found that he does in fact have plans to eventually release a book called Adventures with Rappers, and it's safe to say that I'll being pre-ordering (or better yet requesting a review copy) the first second I can. Wiggaz showcases Emery's wit and deep knowledge about hip-hop and his ability to entertain the reader. It's a funny and reflective paean to hip-hop that refreshingly doesn't take the genre (or Emery's limited contributions to it) all that seriously but does an excellent job at capturing how the music has captivated generations of fans from the Bronx to Bingham, Nottingshire.