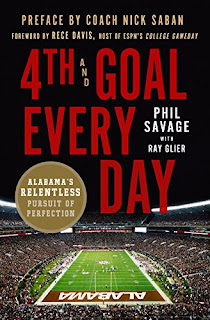 Dating back to the start of the 2008 season, Alabama has played in exactly three regular season games in which it had been eliminated from national title contention. This is an absolutely mind-boggling factoid and a testament to the outstanding job Nick Saban has done leading the Crimson Tide since he arrived at the team in 2007. Despite ridiculous levels of staff turnover, he has managed to churn out dominant seasons year after year. In 4th and Goal Everyday, former Saban co-worker (the two worked together as assistants under Bill Belichick with the Browns), ex-Browns General Manager (the less said about that the better, to his credit he did draft Joe Thomas), and current Alabama radio analyst and Executive Director of the Senior Bowl Phil Savage investigates the secrets to Saban's success at Alabama.

I approached the book with some trepidation because its presumably publishing house-decided title seemed ridiculously cliched and portended a slew of clunky metaphors and hagiographic prose. And yes, Saban comes off very well (there is a brief section on his less-than-stellar tenure with the Miami Dolphins, but it's not particularly long or thoughtful), but there is some substance between talking about how great and successful he is. Savage is able to leverage his connections with Saban to share stories from their days as NFL assistants and how working under Belichick shaped Saban's coaching philosophies. He is still very close to Saban and even writes up film notes for Saban to help prepare for games, but this isn't a fly-on-the-wall account of a season in the life of Saban. Rather, Savage relies mostly on anecdotes and interviews with former players and coaches to help the reader understand how Saban operates. Thankfully, he is able to get a wide array of former Tide players to open up about their experiences and his stories from the Browns also help the reader learn about what shaped Saban during his formative coaching years.

So what makes Saban so great? Savage offers several reasons, dividing his book into the various contributors to the Tide's dynastic run over the last few years. Some factors include emphasizing fundamentals, a tremendous emphasis on recruiting (which has to be helped by the Tide's status as a SEC juggernaut, it's much easier to get talented players when you're located in a high school football hotbed and are consistently the best college team in the country), and constant desire for improvement and innovation and adapting to and setting trends. He is also excellent at developing talent, to the point where some NFL scouts ding Alabama prospects because they assume that Saban has milked all he can out of them and they have basically hit their skill ceilings.

The reader gains considerable insight into Saban's quirks and personality. He is obsessed with little details and perfectionist puts a lot of pressure on himself and his players and fellow coaches, with this high-stakes ethos serving as the source for the (rather cheesy, to be honest) title of this book. Anecdotes such as how Bill Belichick forced Savage to run tryouts for Browns ball boys illustrate the "no detail is too small" philosophy that Saban adheres to at Bama. Savage also details several coaching innovations over the last several decades that Saban is leveraging, such as the Cowboys' data-driven approach to drafting players that began in the early days of the franchise.

Overall, 4th and Goal Everyday is a pleasant read for Alabama fans and anyone interested in how dominant college football programs operate. Savage devotes plenty of time to X's and O's such as why Saban stopped recruiting traditional Nose Tackles and how he coaches defensive backs but also how he fosters a culture of winning and more off-the-field matters. It definitely seems geared towards Alabama supporters, and even die-hard fans may get a bit bored by Savage monotonously detailing recent major Alabama games, but all in all it's a decent read. You're not going to get a deep psychoanalytical investigation into Saban (I doubt he's the kind of person to really open up all that much about anything anyway) but you will finish with a better understanding of how he has been so successful for so long at Alabama.