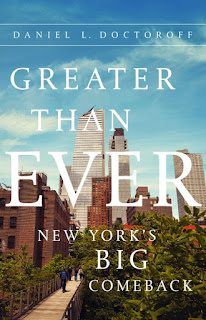 
In some respects, Greater than Ever: New York's Big Comeback could appear to be the victim of bad timing. This summer the city has struggled with especially frequent subway delays, due in part to unprecedented levels of overcrowding. It should be noted, however, that the increased ridership is largely a result of the tremendous growth the city has enjoyed as it recovered from the September 11th attacks. At the start of the Bloomberg administration in 2002, the future of the city seemed much bleaker and the prospect of subway crowding far unlikelier. New York had lost 43,000 jobs in the wake of the attack, 18,000 small businesses were destroyed or displaced and vacancy rates in lower Manhattan skyrocketed. Fifteen years later, the city has seen tremendous development in lower Manhattan, Brooklyn has enjoyed spectacular growth in both population and purveyors of artisan mayonnaise, and new developments such as the High Line, Barclays Center, Hudson Yards, and Brooklyn Bridge Park have revitalized neighborhoods and driven sizable economic growth. Daniel Doctoroff served as the Deputy Mayor for economic development and rebuilding during the first six years of the Bloomberg administration, and in Greater than Ever he reflects on his tenure in the role and how the city achieved such impressive, subway-clogging growth. It is an enlightening and engaging peek into the messy world of urban politics and one of the better books I've read on the subject.

Doctoroff's book is essentially a memoir of his tenure under Mike Bloomberg and touches upon all of the major projects he worked on. It details efforts such as re-zoning 40% of the city to foster growth in neighborhoods such as Greenpoint and Williamsburg in Brooklyn, building new stadiums for the Mets and Yankees, attracting businesses to locate in the city, and improve the lives of New Yorkers through environmental regulations and pedestrianizing streets. The author was a political neophyte when he initially took on the role, having worked in investment banking and private equity before being tapped by Bloomberg. He quickly learned the importance of schmoozing and vote-trading and developed advanced politician mollification techniques to help manufacture the sausage known as urban policy. Doctoroff was at the front lines of many massive initiatives conducted by the Bloomberg administration and describes the often contentious behind-the-scenes negotiations with state and city politicians to get his ideas off the ground.

The book is not afraid to get into the policy weeds, and Doctoroff spends ample time analyzing the rationale for his redevelopment strategy and the intended effects of his policy interventions. Greater than Ever is intended for the lay reader, however, (basically if you are a regular reader of the "New York" section of The New York Times, liked The Power Broker or The Death and Life of Great American Cities, or have any interest in New York City or urban development in general, you'll really like this book and nothing is going to go over your head from a reading difficulty perspective), and Doctoroff is an amiable and intelligible guide through urban economic development concepts. While he may have a business background rather than an academic one, Doctoroff delves into topics such as tax increment financing and selling air rights with a clarity and lucidity that college students probably wish their professors had.

Greater than Ever also offers an account of life in the Bloomberg administration and some insight into how the mayor ran the city (very much like a business, it turns out). Calculating, analytical, and hyper-rational, Bloomberg comes off very well in the book and is portrayed as someone with the best interest of New Yorkers at heart. He was willing to make the tough call on politically-unsavory measures such as raising property taxes and restricting smoking if it meant that overall quality-of-life would improve for the city. The reader also learns about Bloomberg's management philosophy, which is largely based around finding smart, talented, and passionate people and trusting them to make the right calls, which is how Doctoroff had a brief stint as head of Bloomberg L.P. after stepping down as deputy mayor. Doctoroff acknowledges that Bloomberg had his flaws and wasn't the perfect mayor, and while he clearly admires the man Greater than Ever doesn't ever feel like a hagiography of Bloomberg or the city. Greater than Ever is fair-minded and objective throughout, quick to admit mistakes and Doctoroff and Bloomberg's foibles.

Doctoroff was criticized by some in the press as being too preoccupied with the city's 2012 Olympics bid, and his efforts at wooing the International Olympic Committee receive several chapters in Greater than Ever. While his Olympic role may seem unrelated to his deputy mayorship, he viewed the games as a way to galvanize action and development. The thinking is that every city wants to put their best foot forward while hosting the world and hosting the Olympics both motivates considerable new construction and improvements and creates a hard deadline for their completion. Doctoroff specifically wanted to leverage the games to get a new stadium and convention center built on what would eventually become Hudson Yards. The book covers all the wining-and-dining necessary in an Olympic bid and navigating through all the national governing bodies and greasing and/or fawning over them, as well as the campaign's pitches to the IOC and other bodies and how absurdly stubborn former MLB Commissioner and head of the 1984 Los Angeles games Peter Ueberroth was throughout the process (even Donald Trump comes off better in the book, as while he had a few petty spats with Doctoroff he sent him a nice thank you card (albeit with a typo) when he stepped down and was occasionally cooperative with Doctoroff). I'm not sure such extensive coverage of the selection process and other minutiae really contributed to the book's major topic, but the Olympics were central to some major redevelopment processes and I also am personally interested in all the work that goes into such a bid. Readers less enthusiastic about sports and/or associated selection processes in order to attract sporting events can find solace in the fact that these passages are interwoven throughout the book (because again, the Olympics was intended to serve as a catalyst for development to achieve Doctoroff's development goals) and it's not like Greater than Ever turns into a book about the IOC for 100 consecutive pages or anything.

Ultimately, Greater than Ever does a splendid job at outlining New York's economic comeback that began in the 2000's. Doctoroff worked tirelessly on New York's development and its Olympic bid and his passion for both areas comes through on every page, as well as his deep knowledge on such subjects. His book is an excellent read and benefits greatly from his prominent role in the rebuilding effort as an insider and trusted confidante of Mike Bloomberg. If you are looking for an enlightening and at times even engrossing read about urban policy and development you should pick up Greater than Ever.