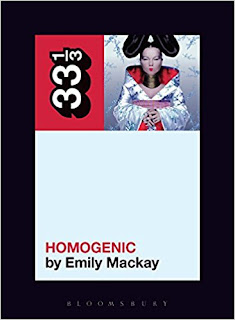 This month marks the 20th anniversary of the release of Bjork's Homogenic, and while the album was not her most commercially-successful or ambitious release, it was her first truly thematically and musically-cohesive album and many fans (this book review author included, though Vespertine makes a strong challenge for the spot every now and again) believe it to be her best full-length. Clearly this is an important work deserving its own entry in Bloomsbury Press' long-running 33 1/3 series, which are generally light and breezy critical explorations of seminal albums. There is no set template for 33 1/3 books, leading to a good amount of diversity, but Emily Mackay, a writer for the likes of NME, The Guardian, and The Quietus, adopts the popular "let's briefly analyze this album from every possible relevant angle" framework and executes it quite well. Her end result is a highly readable look at a classic album that should offer insights and new material for even the most devoted Bjork enthusiasts.

Homoegenic is divided into nine chapters that each study the album from a different perspective. Mackay starts by examining how Bjork's turbulent experiences in the mid-90s, including receiving a letter bomb from a mentally-unstable fan and attacking a reporter at an airport, influenced Homogenic. The middle is devoted to the album itself, looking at lyrical and musical themes and how everything was constructed. The book ends with a study of Bjork's boundary-pushing music videos and experiments with virtual reality and how Bjork has always been at the forefront of technical innovations (her official website launched in 1994 on the same month as the U.S. government's) and places Homogenic in the context of Bjork's discography.

Mackay draws heavily from Bjork's interviews, and the book benefits considerably from Bjork being such a prolific interview subject and so open and honest with music journalists. In addition to the usual magazine interviews, Mackay also mines chat logs and other communications and all of the quotes she shares are relevant and thoughtful. A good bit of them were also new to me, which is a considerable achievement given I have devoured a substantial chunk of the content on the outstanding bjork.fr fansite (as Mackay did over the course of writing her book). That is not to say that this is just a rehashing of old interviews, as the author provides her own analysis when breaking down the album's lyrical and musical content and she also was able to interview major players who worked on the album including composer Eumir Deodato. Some 33 1/3 books fall flat with die-hard fans of the album because a lot of the content is old hat to them, but Homogenic does not suffer from this as there is plenty of original material.

The best 33 1/3 books cause listeners to increase their appreciation for their subjects and Mackay succeeds in that area as well. She identifies several subtle musical flourishes that such as how a short synth riff emulates whale noises during Bachelorette and how the electronic whines that open "Hunter" are actually distorted samples of an accordion that I wasn't aware of even after listening to the album tons of times. Homogenic made me want to jump back into the album and look for all the themes and elements Mackay touched upon in her book as well as look for other things I might have missed. Fans of Bjork will really enjoy this and Homogenic is one of the stronger entries in the series.

Posted by Matt Lieberman at 09:58 No comments: