Advance Book Review: All The Pieces Matter: The Inside Story of The Wire by Jonathan Abrams 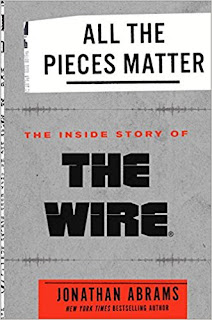 The Wire has aged remarkably well. Almost 10 years after airing its final episode, the show's themes and subject matter are just as relevant as ever, if not more so. It has also played a huge role in ushering in the era of "peak television" and slow-burning narrative dramas like Breaking Bad and House of Cards. While there are plenty of encyclopedic volumes analyzing episodes and story arcs and critically assessing the show through various academic lenses, there are no comprehensive accounts chronicling The Wire's history and production. Jonathan Abrams' All The Pieces Matter: The Inside Story of the Wire adeptly fills this gap, providing an illuminating and insightful oral history of the groundbreaking series. With participation from co-creators David Simon and Ed Burns, studio executives, production staff, and essentially every major actor involved with the show, Abrams is able to cobble together a captivating history of the show that should delight all of its fans.

The book traces the history of the show from creator David Simon's experiences as a crime reporter for The Baltimore Sun through its five seasons and its enduring legacy. Proceeding largely chronologically, Abrams explores the show's influences, its major themes, turbulent relationship with HBO, and more, largely through the eyes of those directly involved with it. One recurring subject in All the Pieces Matter is the show's obsession with realism and the painstaking lengths it took to cultivate it. From the first day of shooting, actors and production staff were taking steps to present an accurate depiction of the streets of Baltimore. Actors such as Felicia Pearson (Snoop) were able to bring their personal experiences into the show and help foster its authenticity, and this verisimilitude actually compelled a real-life criminal in Baltimore to surrender himself to Wire actors portraying local cops, believing he had come into contact with the real deal.


Although this is a departure in both format and subject matter from Abrams' last book (the excellent Boys Among Men about the preps-to-pros era in the NBA), he wrote several definitive oral histories on Grantland about basketball (my personal favorite is his history of the 2005 Pacers-Pistons "Malice at the Palace" brawl). Abrams clearly admires The Wire and writes knowledgeably on the subject, to the extent that I was surprised to realize he basically exclusively focused on basketball during his time at Grantland. Abrams begins each chapter with some exposition but then lets his prose take a backseat, letting the players tell their stories. Additionally, Abrams is able to get his interviewees to open up to him, admitting mistakes and offering candid opinions that greatly enrich the reading experience, and he logically organized his book by keeping things reasonably chronological but diving deeply into particular broader areas when applicable.

Staying consistent with its title, Abrams is able to hunt down virtually every major player involved with the show and the reader discovers the pivotal roles that supporting actors such as Andre Royo (Bubbles) and assistant directors had in the show's success. The only actor with a substantial role missing was Robert Chew (Prop Joe), who tragically died from a heart attack in 2013, and many of his castmates recounted stories about his valuable role as a mentor to younger actors such as the four young teenagers who were central to Season 4. Like many other fans who started watching The Wire after the show's conclusion (invariably after finally caving in after repeated fervid recommendations from friends) and it was strange to see how frequently the show flirted with cancellation. Not just after its languidly-developing first season or the dramatic departure from Season 1 to Season 2, but for virtually each of its 5 seasons (the city of Baltimore compounded matters by threatening to pull the show's shooting permits right before Season 2). Abrams is able to talk with several HBO executives about such matters and get their takes, but their explanations don't make this fact any less mind-boggling.

I have always enjoyed oral histories for their quick pace and colorful insider stories, but I also readily acknowledge their flaws. The two biggest problems with most oral histories is their disjointedness and limited participation. I Want My MTV was a fun read but plagued with random non-sequiturs and James A Miller's mammoth tomes on Saturday Night Live, ESPN, and Creative Artists Agency were generally entertaining but hindered by some key players such as Eddie Murphy sitting out. Thankfully, Abrams is able to avoid both pitfalls through herculean wrangling efforts and adopting a sound structure and format. Sometimes I wish Abrams would chime in a bit more and provide extra background in certain sections, but overall the book flows well, especially given its format. Talking with so many different players allows for multiple perspectives and opinions, and thankfully everyone seems to largely agree on most matters and stories and Abrams is not forced to mediate between multiple conflicting viewpoints. Simon and Burns and the actors (rightfully) are the biggest contributors to the book, but I also liked hearing from writers such as George Pelecanos and Richard Price about their roles in shaping the show.

The book is packed with anecdotes and trivia (John C. Reilly was one of the early actors considered for McNulty and actors were often prevented from interacting with their real-life inspirations). Yes, some of the trivia such as Omar being originally intended as a bit player are likely familiar to fans, but the insights from David Simon about his thought process about whether a gay character would fit in his gritty, inner-city world and how actor Michael K. Williams interpreted his role add extra color and new revelations to such stories. There was a period in college where I became obsessed with the show and devoured virtually every piece of content related to the series, which like most pop culture minutia has remained moored in long-term memory and crowded out bank passwords and other far more important information, and the book was still quite revealing.

All the Pieces Matter is designed with fans in mind, chock-full of spoilers and references that will fly over the head of the uninitiated, and it is a treat for those who have watched and enjoyed the series (even if they didn't care much for Season 5, like this particular reviewer). The Wire was one of the greatest television shows ever and All The Pieces Matter is the definitive history it deserves. Not only is it an excellent book, it also inspired me to restart the show on HBO Go with an even greater sense of appreciation for its craft and attention to detail. Perhaps this is a bit pessimistic given we're still in December 2017, but I would not be surprised (or bummed out) if All The Pieces Matter ends up being my favorite book published in 2018.